The leaves are slowly starting to change colors and the pre-season is over. This past Thursday, the National Football League officially kicked of its new season. As is always the case, there were a lot of questions. Things like who’ll dominate player rankings and make it to the Super Bowl are all on people’s minds. How to watch football on Windows 8 is also something that’s come up a lot.

Watching football on Windows 8 tablets, laptops and 2-in-1s makes about as much sense as it does on any device. Many single households don’t have a television to watch football on. Many more users would also prefer to watch football when they’re out in the world and have some free time.

Here’s how to watch football on Windows 8 and a brief look at how each service the powers each app works.

Watch NFL Football on Windows 8 with NFL on Windows 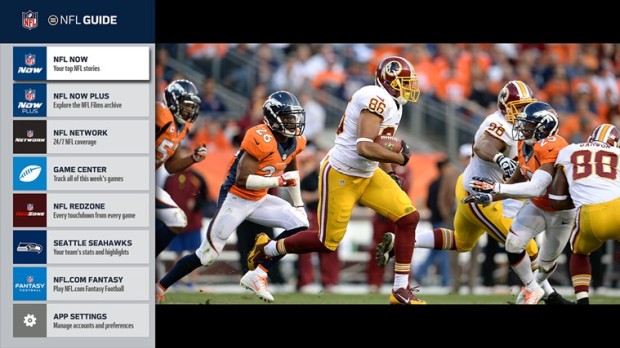 It’ll probably come as no surprise that the easiest way to watch highlights and review other football footage is through a Windows app made for Windows by the NFL itself. Available free through the Windows Store, NFL on Windows 8 allows users to open multiple tabs and keep track of games and follow their favorite teams. Users can even log into NFL on Windows 8 and set touchdown notifications every time their favorite team scores.

Video highlights and NFL.com Fantasy Football League integration are free, but users who want to watch all the festivities live have to sign up for a subscription service called NFL RedZone or the NFL Network itself. In order to get access to NFL RedZone users need a cable subscription with a provider who works with RedZone. Big names like AT&T U-Verse, Cox, Dish and Verizon FiOS are all partnered with NFL RedZone. Unfortunately, Comcast, one of the country’s biggest providers is not. The NFL Network is directly affiliated with NFL RedZone too, so you’ll need a cable subscription that supports it for that service too. 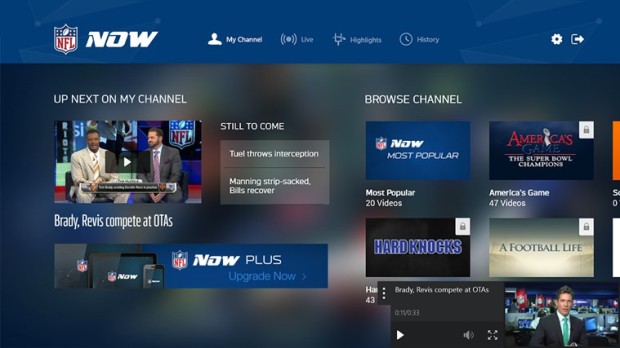 NFL Now is a strange beast. It’s another official app available through the Windows Store, but it’s heavily focused on a personalized experience. Users who install the app can keep up with their fantasy, deep dive into the NFL video library for classic films and enjoy highlights – provided they have a paid subscription.

[ NFL Now on Windows 8 from the Windows Store ] 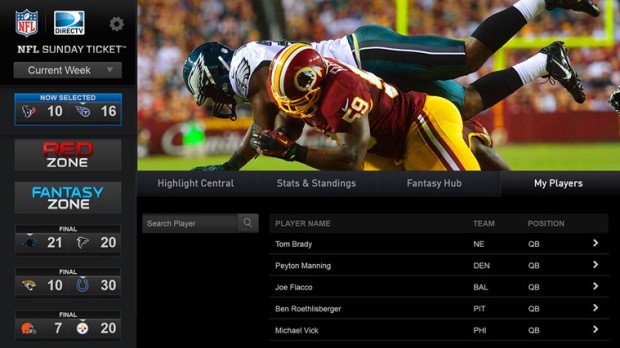 NFL Sunday Ticket for Windows 8 users are able to watch footage from NFL Red Zone. They can also live stream video for games that aren’t taking in their home town. What that means is that users in Washington D.C. can’t watch Redskins games through NFL Sunday Ticket on Windows 8, however they can watch Denver Broncos games or Pittsburg Steelers games. Stats and upcoming game schedules are downloaded directly into the app. Whenever there’s a big play to be seen, NFL Sunday Ticket will send out an alert. It really is the best way for users to experience the 2014 NFL Season wherever they are – in theory.

Just like with the other services, watching football on Windows 8 devices live through NFL Sunday Ticket for Windows 8 gets all sorts of complicated thanks to a required subscription service. Anyone is free to download the NFL Sunday Ticket app but only subscribers can actually use the app to watch live out-of-town games.

Users must actually qualify before they are allowed to subscribe directly to NFL Sunday Ticket. More specifically, users have to live in certain places. Say if you live in a house, it’s likely that you won’t quality for NFL Sunday Ticket because the service is meant for users who can’t put a satellite dish on the roof and sign up for DirecTV. DirecTV wants apartment dwellers and college students only, though it does seem to make allowances for major cities like New York and San Francisco.

Once you’ve passed the eligibility requirement there are other details to keep in mind. A NFL Sunday Ticket subscription comes in three different forms. NFL Sunday Ticket to Go allows users to stream games live on smartphones, tablets, laptops and desktops. It costs $199 for the entire season. There are apps for Android phones & tablets, Windows Phones and tablets the iPhone and the iPad. NFL Sunday Ticket Console allows users to stream live footage to the video game console of their choice for $239. Apps for the PS4, Xbox One and PS3 exist, but Xbox 360 users and anyone on a Nintendo console are out of luck.

NFL Sunday Ticket Max combines both of those packages and ads in real-time stats for $329. All subscription prices have to be paid in full at registration for users who qualify. That sort of makes it less of an impulse purchase and more something users should consider in advance.

Regardless of how you choose to watch football on Windows 8, good luck and remember to keep an eye out for fine print. It’s also not a bad idea to check each site often if your cable provider isn’t among this listed today.