How to Watch Live TV on the iPad & iPad mini

It’s easy to watch live TV on the iPad and iPad mini thanks to a great collection of apps and services updated for 2012.

Most of the apps for watching live TV on the iPad and iPad mini are free to download, but need a cable or satellite subscription.

Several apps only work on a user’s home network, which means there’s no streaming while at the coffeeshop or in the car, but it’s still a really handy way of putting a TV in the kitchen, garage or spare bedroom.

There are more ways to watch live TV on the iPad than there were a year ago, and there are more channels available, but the experience is still missing many live sport events and not all the apps will allow users to AirPlay to an Apple TV.

How to Watch Live TV on Your iPad & iPad mini

Users will still need a cable or satellite subscription to watch live TV on the iPad for most apps. There are solutions like the Slingbox that doesn’t require a separate cable subscription. Users living in NY can also get a direct to iPad live tv solution, but the majority of users will need to sign up with a local provider and use a companion app with a select list of channels.

Time Warner Cable subscribers can download the free TWCable TV for iPad app for access to over 250 channels of live TV on the iPad. The app includes access to CNN, Comedy Central Disney, Cartoon Network, FX HD, G4, MTV and many more, including HBO channels for premium subscribers. 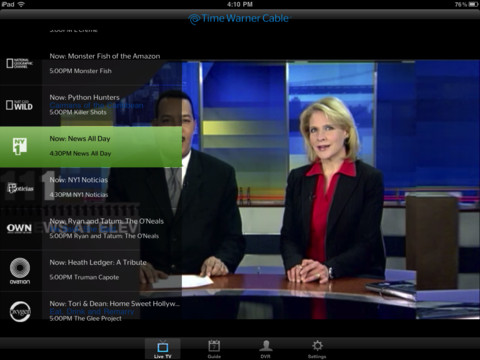 Watch Live TV on the iPad or iPad mini on Time Warner Cable.

The biggest downside to the TWCable TV iPad app is that it only works on a user’s home network. This means there’s no way to watch it while on the road or at a freind’s house, even if they also use Time Warner Cable.

There is no access to DVR’d shows or on demand programming, so it can’t replace Hulu Plus for many users. The app does allow users to see the Channel Guide and record shows to their DVR as well as use the iPad app to change the channel on the cable box.

The Comcast Xfinity iPad app doesn’t allow users to stream Live TV on the iPad, but it does deliver a wide array of on demand programming which users may appreciate more than finding the time to watch their favorite shows on air. 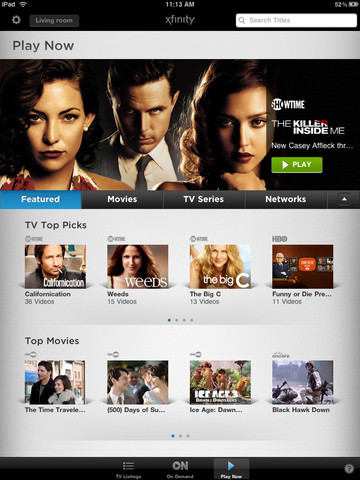 Watch on Demand TV on the iPad from Comcast Xfinity.

Unlike the TWCable TV app, the Comcast Xfinity app allows users to watch on demand programs from any WiFi connection, not just at home. This means it is possible to take the iPad on a business trip or vacation and tune in to movies and TV shows without paying a hotel.

With the Xfinity iPad app, users can view channel guides, set their DVR to record and change channels on a Comcast cable box. There is no way to watch DVR’d shows from the iPad.

Cablevision subscribers can tune in to the Optimum for iPad app to watch live TV on the iPad or iPad mini. This app lets users watch all channels they are subscribed to on the iPad and allows users to watch Free and Subscription on demand videos. 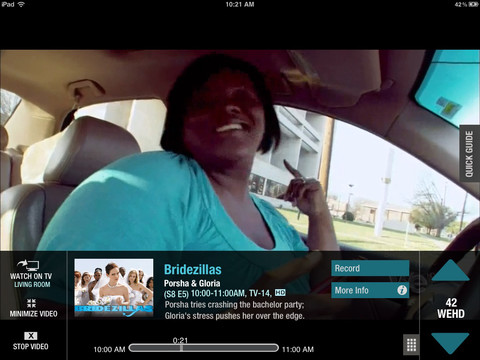 Watch any channel live on the iPd on Cablevision.

The app acts as a remote control to change channels on a cable box and can schedule DVR recordings. It doesn’t look like the app allows users to watch their DVR’d shows.

Like the Time Warner Cable app, users can only watch live TV on the iPad or iPad mini at home.

Dish Network allows subscribers to watch Live TV on the iPad with a specific cable box and or adapter and the Dish Network iPad app. This is an integrated Sling DVR or a Sling adapter solution that is much like the standalone SlingPlayer solution. 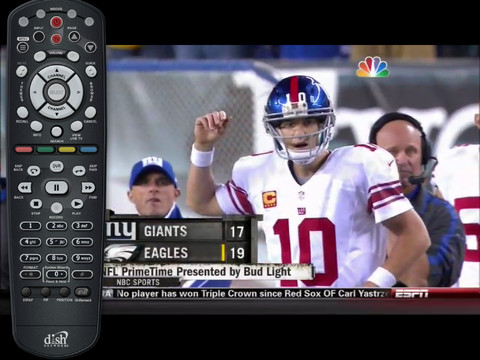 Watch Live TV, including the NFL, NBA and other sports on the iPad.

With the DishNetwork app users can watch live TV on the iPad anywhere, on the iPad on WiFi or on 3G and 4G LTE networks. This service streams all the channels from Dish Network, DVR’d shows and On Demand content. This includes live sports, something not available on all Live Ipad TV apps.

Users can order the Sling Adapter from Dish for $49.99 and need a compatible Dish Network box to attach it to, including the Hopper.

Direct TV offers one of the best iPad apps with access to live TV, DVR’d shows and on demand content. The Direct TV iPad app offers Live TV for a long list of popular channels, including many of those found on Tim Warner Cable. 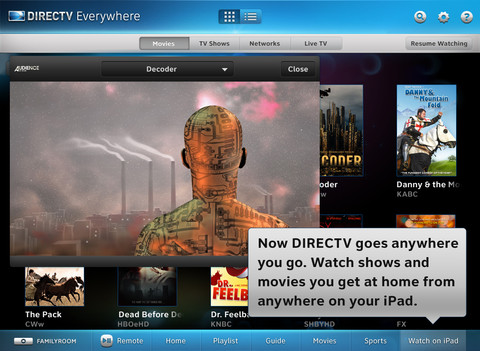 Watch live TV on the iPad with Direct TV.

For subscribers that also pay for ShowTime or HBO, the app offers access to popular shows like Game of Thrones and Boardwalk Empire. The app also streams NFL Network, for Thursday Night football action.

The Direct TV iPad app lets users watch live TV at home, and allows users to see other shows at home or on the go, even on 3G or 4G LTE. The app allow users to control their TV by selecting a channel on the iPad.

Users that live in New York can subscribe to Aereo, a live TV service designed to stream to the iPad, smartphones, tablets and computers, without the need for wires at home.

With Aereo, users rent an antenna from Aereo that is used to steam major networks as well as other channels to the iPad or other devices. This remote antenna allows the user to control it to pick which channel to stream to their iPad. The selection of channels is not as big as other solutions, but it is ok, especially with plans from $8 to $12 a month, or $80 a year.

This includes the ability to DVR shows, on a limited basis, with options to record 3 hours, 20 hours or 40 hours of video based on the plan selected. This is only available in NY, but the CEO is eyeing an expansion to other cities.

Users can tune in to Aereo in the iPad browser.

Slingbox is the most expensive solution for watching live TV on the iPad, but it is the most feature packed. Users install a SlingPlayer device on their home network, and connect it to a cable box or OTA antenna and then use one of the $30 apps to control their DVR or TV and watch live TV from anywhere. 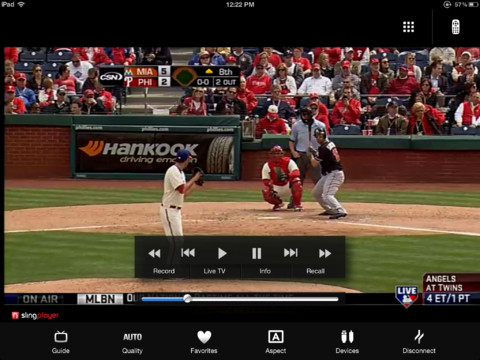 Watch live TV on the iPad with Slingplayer.

This solution lets users stream any channel on the TV and control their DVR complete with On Demand programming, so you can watch the TV that’s already paid for on mobiel devices. The apps are not free, so users need to pay for the Slingplayer app on each device. The Slingplayer iPad app is currently $14.99, down form the normal $30.

Read our Slingbox review for more details on the service. Slingbox released the new Slingbox 500 and Slingbox 350 for $299 and $179 respectively. The Slingbox 500 includes built in WiFi. Note that Slingbox devices may not play well with all cable setups.

Users looking to watch Sports Center and Monday Night Football will want to tune in to the Watch ESPN app for iPad. This app offers live ESPN streaming of multiple ESPN channels on any internet connection. 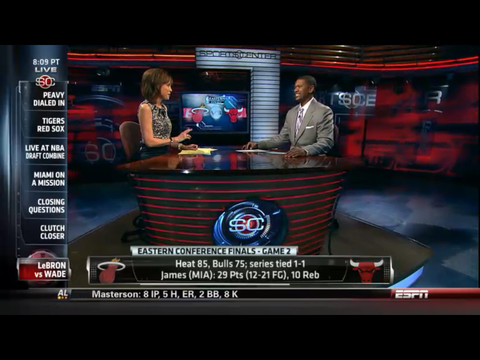 Watch Sports Center and live sports on the iPad.

Users still need a cable subscription with a big name cable company to use the app, but the app is compatible with most majore players.