The NBA season is in full swing and users that want to see their favorite team play can watch live NBA games on the iPhone and iPad for $55.

With the NBA League Pass Mobile, iPhone and iPad users can watch the NBA games on the go with their iPhone or iPad, and can share a subscription between their own devices, though fans can only watch on one device at  time. 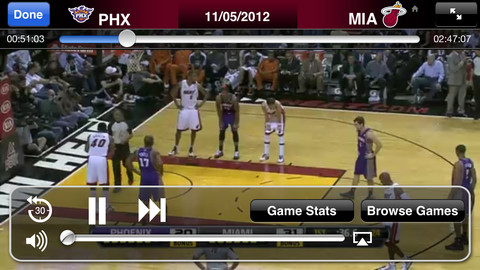 Watch NBA games on the iPhone with live action.

The NBA offers several subscription models, but the best deal is the mobile only offering that includes the 2012-13 NBA season for $55. The deal is even better for Sprint customers who can score 20% off the list price. Users that also want a League Pass for their TV can buy through a cable or satellite operator and bring the action to their iPhone or iPad too, but these bundles start at $189.

With a NBA League Pass subscription users can watch a lot of basketball, but not every game is available on the iPhone or iPad. Just as on TV, local and national blackout rules apply, so subscribers may miss out on some games. The subscription only covers regular season play, so be ready to pay more if your team makes the playoffs or goes for the Championship games.

The NBA League Pass works on WiFi and on 3G or 4G LTE, though video quality may take a hit. Users on limited mobile data plans will want to keep a close eye on their usage.

Several reviews mention problems activating the NBA League Pass Mobile subscription on the iPhone or iPad, but it is worth noting that it can take up to 72 hours for the subscription status to go live, so fans hoping to watch the action should subscribe before their team plays next.