In just a little under an hour Samsung will be taking the big stage at New York City’s Madison Square Garden for its Galaxy Premiere 2014 Event. Teased as Tab Into Color most eyes are expecting news on a new round of Samsun Galaxy tablets, most likely with AMOLED displays.

Lots has been leaked about what Samsung has in the offing and most expect to see Galaxy Tab tablets in 9 and 10 inch variants that aim for the high end of the market. 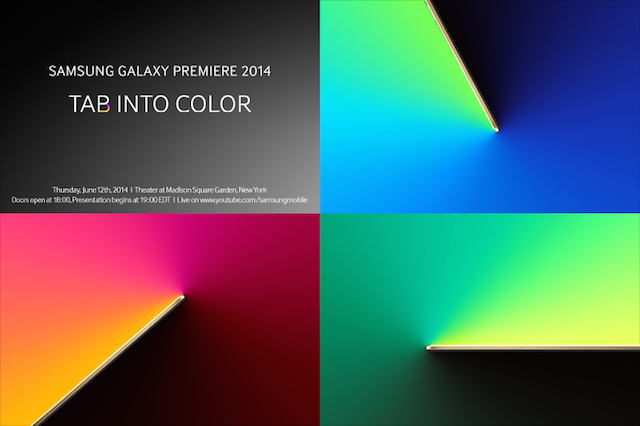 The specs of the Galaxy Tab S are expected to nclude 2560×1600 AMOLED displays. Processors are expected to be the octa-core Exynos 5420 CPU with four 1.9GHz Cortex-A15 cores and four 1.3GHz Cortex-A7 cores. There is the possibility that like the Galaxy S5, the Galaxy Tab S will feature a fingerprint scanner integrated into the home button jumping ahead of arch rival Apple’s iPad line which don’t yet include Touch ID.

There is also some thought that Samsung might be introducing a 13.3 inch Tablets as well, although those rumors aren’t as firmed up as those for the smaller variants. While it isn’t out of the question, there probably won’t be new smartphone news at this event based on what we’re hearing.

If you want to watch the event streaming live you can go to this YouTube link. Samsung also has info at this page.

For those with relatively lengthy memories, they might recall Samsung’s event on another big New York stage when Samsung unveiled the Galaxy S4 smartphone at Radio City Music Hall. Samsung took quite a bit of flack for its over the top presentation, so what Samsung has in store for this event is anyone’s guess.