While users might not be able to make the trek to London to see the Samsung Premiere 2013 event, they’ll still be able to watch starting at 2PM Eastern Standard Time.

Though there have been no hugely credible leaks about what’s coming up during today’s event, users will be able to stream the entire event directly from their browser at home on the company’s YouTube page.

It’s likely that the company will take the opportunity to showcase its Nokia 808 PureView competitor and follow-up to the Galaxy Camera, the Galaxy S4 Zoom. The Galaxy S4 Zoom includes a 16 megapixel camera with a built-in lens on its rear that’s capable of 10X optical zoom. Unlike its immediate predecessor, this device will include the ability to make phone calls as well as connect to mobile data networks. Nokia is expected to announce their own 808 PureView successor, the Lumia EOS at an event on July 22th. 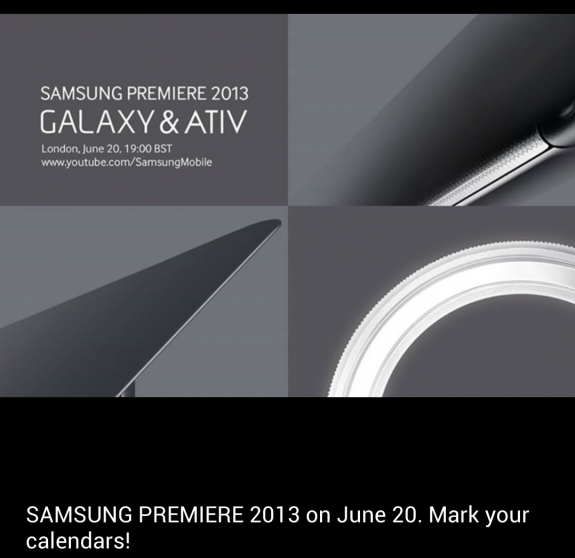 As far as the ATIV line, users could be in for slight refreshes. While Samsung did partner with Microsoft to create new form factors for the Windows 8 and Windows Phone 8 launch, the company has done little to keep the line exciting or fresh.

At the very least users could be in for a line of Samsung ATIV laptops using Intel’s new Haswell chipsets. According to Intel, simply replacing the Core i Series processors in today’s notebooks with Haswell chipsets could result in as much as 30% more battery power.

Likewise, the company’s Windows Phone 8 based devices are also do for an upgrade, or at least a new handset. The Samsung ATIV S –the company’s flagship running the operating system, seems to have been based on the hardware of the Galaxy S3. Since then Samsung has moved on to create the Galaxy S4 with the latest processors and chipsets.