Indy Car fans can watch the Indy 500 online with Watch ABC and ABC Online where the broadcast company will offer a free 2014 Indy 500 live stream on Sunday May 25th  at 12PM Eastern. Users can watch this on the iPhone, iPad, Android, computer and the Kindle Fire

The 2014 Indy 500 pre race coverage starts at 11 AM Eastern and is a part of the 2014 Indy 500 live stream coverage brought to fans by ABC. The full Indy 500 stream lasts until 3:30 Eastern, before the app and online stream switches over to another program.

For race fans that can’t be at home this is great news, but there are a lot of limitations to the official Indy 500 live stream. You need to live in a specific region and you need to subscribe to a specific cable or satellite company. If this method doesn’t work, we also have a few other ways you can watch the 2014 Indy 500 live from your iPhone, iPad, Android ro computer.

The Watch ABC service is very strict about the need for a cable subscription and live streaming is only available in a small number of markets at this time. If you live in Chicago, Fresno, Houston, Los Angeles, New York City, Philadelphia, Raleigh-Durham or San Francisco you can watch the Indy 500 live stream from almost any device. 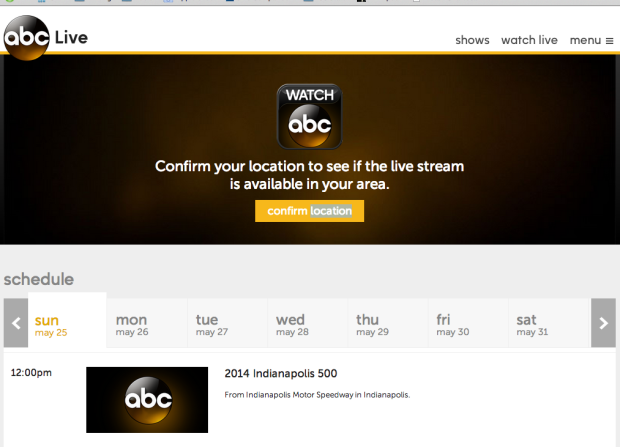 Fans can tune in to Watch ABC for an official 2014 Indy 500 live stream on Sunday.

To watch the Indy 500 Online you need to go to Watch ABC online from a computer or download the app on iPhone, iPad, iPod touch, Android devices, Kindle Fire and Windows 8. Once you’ve downloaded the service you will need to login to verify your cable subscription and your location. If you don’t have a cable subscription you may be able to use a friend’s for the weekend, or skip ahead to see other options.

If you cannot view the official 2014 Indy 500 live stream you can head to Best Buy or another retailer to buy a Slingbox. This is a small box that connects to your home network and your cable box to stream live TV to your iPhone, iPad, Android or computer anywhere with no restrictions. Anything on your home TV can now show up on your phone or tablet. The only real catches are that it takes over the TV that someone is watching and the HDMI mode is not perfect. Read our Slingbox 500 review for more. 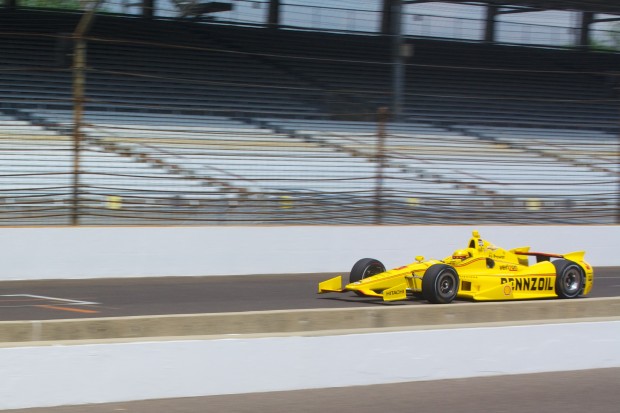 Watch the Indy 500 online with these apps and services.

If you are a Verizon subscriber you can download the official IndyCar 14 app to get access to Live coverage and live in car cameras. Here’s a look at what the IndyCar 14 app offers.

This is not as good as a full stream of the Indy 500, but if you are at the Indy 500 in person, or just need to stay connected while on the go, this is an essential app. The features above are exclusive to Verizon users. There are also other features that any iPhone or Android user can use. Download the IndyCar 14 app on iPhone, iPad or Android.

Verizon invited Gotta Be Mobile out to the Indianapolis Motor Speedway to see how the company prepared for the massive number of Indy 500 fans. With over 200 antennas and many other upgrades Verizon is ready to keep fans connected with fast XLTE speeds that can handle the live video that their app will be pushing during the 2014 Indy 500 race on May 25th.