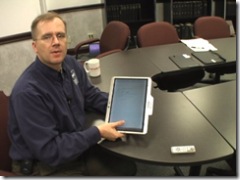 Along with the stunning new design, there are some nice new features like a webcam, keyboard light, business card scanner, WXGA screen, and capacitive touch volume controls. However, as you’ll see in this InkShow video review, some of the design choices HP made were at the expense of function. For example, the capacitive touch volume controls sound like a great idea, but practically speaking, the lack of tactile feedback make them difficult to use. In addition, they are not available while in tablet mode.  In fact, there are very few options available while in tablet mode. While the 2710p is a fantastic unit and I’ll continue to use it, there are some things about the 2710p that prospective buyers need to know before making a decision, and I try to cover most of those in this review.

Along with a detailed tour and honest assessment of the 2710p, you’ll also get to see:

Even with some things that will make a tablet user scratch their head, I still like this tablet pc a lot, and I will continue to use it for awhile. Please note: there are some initial audio issues the beginning of the video that smooth themselves out after a minute or so. I was experimenting with a wireless mic that was getting some interference.