Despite writing an article saying that no one should buy an HP Touchpad, I found myself looking for one this past weekend.

The marketing move by HP generated a demand for their previously failed tablet and as a result people are buying them on eBay now for $300 or more. You can’t find one at the fire sale price less than 12 hours after it went into effect. People put them up on eBay making more money than HP ever made. In the tech center of the US, San Francisco, both WebOS and Touchpad are trending topics on Twitter. 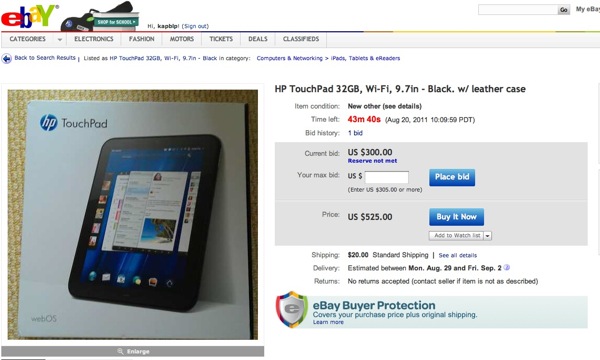 Today we would be reading editorials about the success of the Touchpad as an Apple iPad alternative. We’d be talking about the genius of HP using their successful printers and computers as an enticement to sell tablets and vice versa. We also would be hearing about developers working to meet the growing demand for apps that work on the million or more Touchpads now on the market.

HP was too enamored by their product to make it a loss leader and take a hit on the price, but this kind of aggressive marketing will attract buyers and will work against the Apple juggernaut. What we’ve learned: HP arrogance killed the Touchpad, not Apple. Because of this, everyone sees that no one can go head-to-head with the iPad now.

It’s too bad that HP was not smart enough to come up with this genius marketing campaign before announcing the end of the product. At $99 the Touchpad sold like an iPad. Who knows what it would have done at a reasonable price of $300. It does more than the Nook and look how successful the Nook has been at $249.