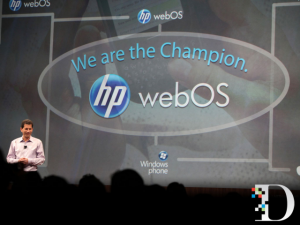 Where to start? So many things have gone wrong for webOS that it is tough to get things rolling. Palm failed to make it happen with the Pre. HP bought it and famously doubled down on webOS. Only problem was those doing the doubling down either got shook by what looked like a runaway market with Google chasing Apple, or just couldn’t figure out that they needed to sit back and hold off a bit. But then, that’s been the story of the mobile race for just about everybody but Apple these last few years. I’m guessing even Russell Brand could figure that one out.

I’m afraid the sad reality is that HP believed its own hype about its webOS dreams and didn’t bother to check out what it was creating or the market it was creating it for. Remember “Think Big, Think Small, Think Beyond?” Methinks HP should have just been thinking. Sure, back in the spring when announcements were being boldly made, it looked like Google and Android was going to be a serious player in the Tabletscape. But by the time HP actually got around to releasing the TouchPad, it was evident to all but the Android fan boys that Google hadn’t figured out Tablets yet. If HP was a running back on a football team, it failed to see its offensive line open up a hole that a baby could gain yardage through. But instead, HP felt like it needed to throw the long ball on first down and now is faced with one of the greatest punts in tech history. Or is that a fumble?

HP is blaming the hardware for the failure of this webOS dream. Well, let’s see what’s wrong with that thinking. First, everyone, including HP, had a working assumption that HP was going to follow Apple’s model of controlling both the hardware and the software. Like it or not, the partner model in the computing industry has probably seen its day come and go. Google and Motorola are counting 12.5 billion reasons why that’s now the case. So, if the hardware isn’t up to snuff, why release something you know isn’t going to catch fire after hyping it to hell and back? Again, by the time HP released the TouchPad, the only reason Google and its Android Tablets were sitting at number two was because no one else had an entry in the race. Microsoft had conceded any hope of competition this year. (I bet Steve Ballmer is laughing his butt off about this news.) It might be accurate to blame the hardware, but who signed off on the hardware? I’m guessing the same folks who signed off on webOS. The sad reality for HP is that they could have waited onger to iron out the kinks. At least the version of webOS that was so slow and buggy at launch would have had a chance to be updated. The OTA update to version 3.0.2 isn’t the greatest thing since sliced bread, but it might have softened some of the negative reviews just a bit. I’m not saying it would have saved things for the TouchPad had HP waited, but it would have at least given them a better chance in the game. You just have to imagine the meeting when the decision to launch was made. I’m assuming those in the room at the time were intelligent people, and realized what they held in their hands wasn’t going to cut it. But they went ahead anyway. Shortsighted? Arrogant? Desperate? I’m not sure, but you certainly can’t characterize it as smart.

Whether its corporate BS or face saving PR, I’m not sure, HP is still publicly clinging on to hopes for webOS even though it is shutting down the hardware it was supposed to run on. This Is My Next says that in an all hands on meeting with the webOS folks, HP is still saying that webOS has a life. Whether that’s something that other companies will buy or license, or whether HP will take the route of making it Open Source is a matter of speculation. Surely with the patent and legal wars that seem to be occupying board rooms these days, Samsung and HTC will give this more than a passing thought. Heck, Apple might do so too just to thwart its competition, but I doubt it.

But if you ask me, the talk sounds like a football coach at halftime who finds his team behind by more than even he can envision it scoring in the second half. Jobs will be lost. The development community that may have been cheering from the sidelines has already headed for the parking lot. I’m guessing even the cheerleaders’ are headed for the bus for the long ride home. Keep in mind that this was more than just about Tablets for HP. This was about phones. This was about computers (you know the old fashioned kind) this was about putting webOS on printers. Yep, printers. And this was from the largest PC maker in the world, who now wants to get out of that business within the next 12 to 18 months. The more you examine the fault lines, the more this looks like a predictable earthquake in a world where that’s impossible.

Does that mean HP knows something no one else does? Is the Enterprise really the future for HP’s shareholders? Oh, wait, after the lackluster reviews for the TouchPad on blogs and in the media, HP swore up and down the Enterprise was what the TouchPad was all about anyway. So, I’m guessing that means they feel really comfortable in that space too based on HP’s announcing its decision to purchase Autonomy. Watch out for a doubling down statement on that soon. Keep in mind that HP’s CEO Leo Apotheker is an Enterprise guy.

In reality the only things that are clear after today’s startling announcements from HP is that the Microsoft Kin no longer has the dubious distinction of being the fastest flopping mobile device in recent memory. The TouchPad lasted all of 49 days. The Kin made it 55. That is if you forget the CrunchPad/JooJoo. But, hey, even those folks are trying for a comeback. The other thing that is clear is that we’re now seeing the success or failure of of mobile devices treated like the success or failure of summer blockbuster films. Hype the heck out of the product, hope the hype creates enough first weekend sales to make back most of the investment, and pray for good reviews. Here today, gone tomorrow.

But about that tomorrow. HP might look a bit silly today. Even they would have to admit that from a public facing viewpoint. But as the the mobile tech space increasingly becomes as much about patents as it does about devices and Apps and such, HP is sitting on a bunch of patents that it acquired in the Palm deal. That might turn out to be the ace up HP’s sleeve as it watches its chips taken off the table in this losing hand. Stranger things have happened in the world of mobile computing. This week.