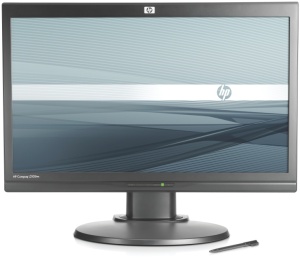 Seems like everybody wants to support Windows 7 multi-touch any way they can. This time it’s HP making the first official announcement of a Windows 7 certified multi-touch monitor, the HP Compaq L2105tm. Official word was snuck into a big press release today (excerpt after the jump), and DisplayBlog got some additional info from HP.

The 21.5″ monitor is 1080p and uses VGA and DVI-D with HDCP connections, plus USB for the touch input. No surprise it uses an optical touch system like the Touchsmart desktop, detecting objects in close proximity of the screen. It comes with a stylus, so they definitely expect you to jot notes on this thing, as you might on a whiteboard. No info on tilt, but from the looks of it, I’d say it’s standard, which is not much. Looks like it should be mountable though. Priced at $299, it’s quite an affordable way to add multi-touch screen input to a PC.

HP also introduced the HP Compaq L2105tm Widescreen Touchscreen Monitor, its first Windows 7 multitouch certified monitor. The monitor’s optical touch panel technology can increase the speed and efficiency of work performance and productivity by allowing inputs to be recognized quickly, accurately and without drift. One finger is used to scroll through screens, while two fingers can replace a mouse to perform common multitouch gestures. The HP Compaq L2105tm also includes a hard stylus that tucks away neatly into the side of the monitor for easy storage.