HP announced a new addition to its Chromebook lineup today, and it’s called the Chromebook 11. It features an 11.6-inch IPS display, an Exynos 5250 Processor and up to 6 hours of battery life. It’s available right now to purchase for $279 from Google Play and a number of retailers online or in-store.

What’s perhaps most unique about the HP Chromebook 11 is that it uses the same microUSB charging standard as most Android smartphones, which means you can use the same charger on the Chromebook that you use with your Android device, making it even easier to travel with it, since you don’t have to pack another charger to take along with you.

Of course, if the $279 still doesn’t seem like a good deal, Google is throwing in some free services, including 100GB of Google Drive cloud storage (free for two years — a savings of $120) and a 60-day free trial of Google Play Music All Access (normally $20). 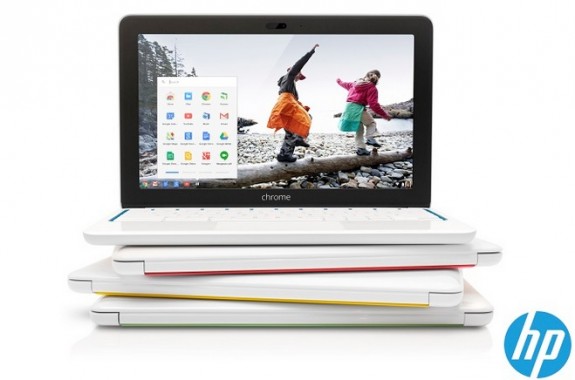 The new Chromebook also comes in several color options, including an all-black version, as well as a white version that comes in different-colored trim selections, such as blue, green, red and yellow. Unfortunately, it doesn’t come in any models with LTE — only WiFi models, and it’s not said whether or not we’ll see LTE variants in the future.

While the Chromebook Pixel is Google’s flagship Chromebook, the HP Chromebook 11 looks to be the company budget flagship model, as the both Google and HP boast that this the best budget Chromebook yet, sporting a nice-looking IPS display and a rugged outer shell built reinforced with a metal frame. It’s certainly one of the cheapest Chromebooks we’ve seen, but it isn’t the first time that a Chromebook has broken the $300 barrier. However, $279 certainly seems like a great price for a piece of machinery that can be used to browse the web and check email.

For now, the HP Chromebook 11 is only available in the US and UK, but Google says that it’ll be available in other countries later this year in time for the holidays. Google has been pushing its Chromebook line recently, sending out more and more ads trying to get the word out on the new Chrome OS-based laptops. Chromebooks haven’t been too popular lately, as many consumers usually just go with what they’re used to: Windows or Mac, but we’ll see if Google can turn any heads come this holiday season.