Introducing forum member – Sierra – You have the helm!!

I recently decided to go back to school for my Masters degree, so naturally I started thinking about what Tablet PC I could use. I did some research and didn’t really find anything that excited me Ã¢â‚¬” until I saw the HP Compaq 2710p. I have always loved my HP Compaq TC1100 and this new Tablet PC seemed to have some of the features that I love from that system. The morning it became available, I bought it. J 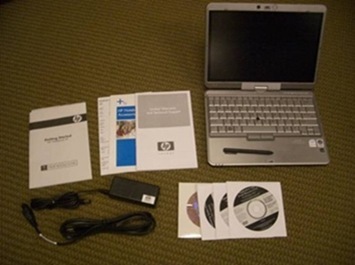 The box was small and light and there just wasn’t much in there.

However, everything I needed was present. One surprise was that it came with a full license of OneNote 2007. Although I had planned to install OneNote already, it was nice to have the full license already there. Also great for anyone getting a Tablet PC for the first time.

One feature that I loved about my TC1100 was the battery meter right on the battery. It’s great to be able to see how much battery life I have without booting the PC. The 2710p has retained this feature and even made it prettier. 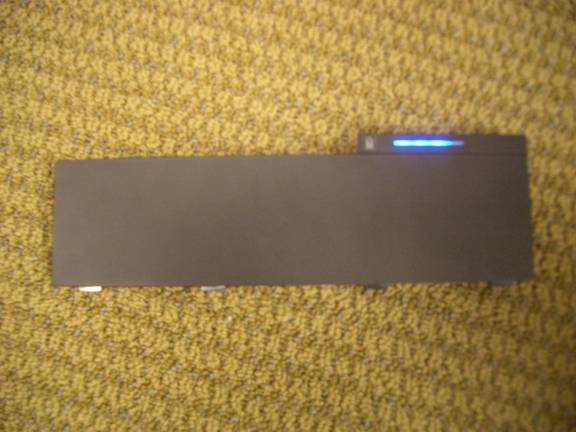 There is a small button on the back of the battery that you push and it lights up a meter that is easy to read.

When I powered on for the first time, I was curious what my Out-of-Box-Experience would be like since I knew I had the option of Windows Vista 32-bit or Vista 64-bit. When I powered on, it asked me which OS I wanted. Personally, I selected 32-bit due to compatibility issues with some of my work apps. It basically started installing the OS at that point. It took 1 hour 15 minutes to get to the usable desktop for the first time. It was a relatively unattended process and required at least 3 reboots but minimal interaction.

Once I got to the desktop, it was beautiful. The screen is bright and easy to read. These pictures do NOT do it justice. I need to figure out how to take better pictures. 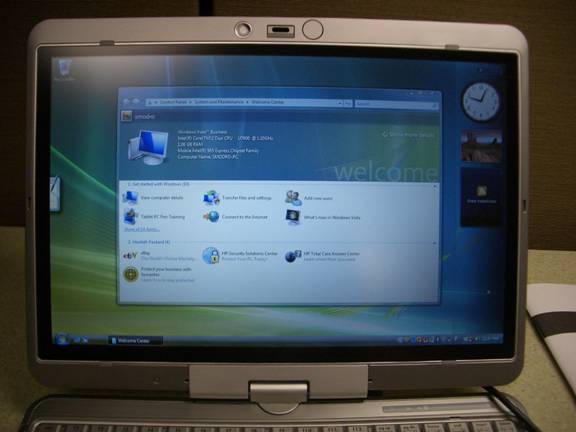 As for the screen itself Ã¢â‚¬” beautiful. Bright, clear and the most smudge-proof screen I’ve ever used. I’ve never taken a microfiber cloth to it yet and it still looks like new Ã¢â‚¬” no fingerprints, no smudges. When it gets dusty, I just lightly wipe off the dust with my hand (!) and it doesn’t even smudge then. Just to test, I firmly planted my thumbprint on the screen. I can see it there. I lightly brush it with my hand and it is gone. No smudge. This will save me hours of cleaning. J

The screen used LED backlights. The backlighting is so even that I can’t tell how it is done. My husband is an optical engineer and he lusts after my LED backlights. J The viewing angle is as good or better than any system I’ve used before, probably 170 degrees or so. I don’t believe anything is really 180 degree viewing angle. This is very easy on the eyes and rarely do I need it at max brightness.

It uses a Wacom Digitizer.

The system is fast. I can’t really do an apples-to-apples comparison because I don’t have another Windows Vista system, but compared to my TC1000 (1.1Ghz, 1GB) and my P1610 (1.2Ghz, 1GB), the 2710p seems significantly more responsive. That said, I’ve had the CPU and memory gadget running and it uses much more CPU processing power and memory than I anticipated. With my usual setup open (Outlook, OneNote, couple of IE, and usually Excel) I’m running at about 25% CPU used and about 1GB of memory used. Since I have 2GB of memory, that’s okay, but more than I expected based on my Vista experienced before.

That said, I haven’t had to wait on anything. It’s been really nice. I know that people are concerned with the 4200rpm hard drive Ã¢â‚¬” truth be told, I was annoyed at that too. But I have the 100GB drive and it seems to be as fast as I require. I’m no gamer Ã¢â‚¬” PowerPoint and OneNote are my power apps. J But I’m very happy with how well it has performed. It blows the socks off my TC1100 at opening IE7 and Office 2007 apps. (I don’t have IE7 or Office 2007 on the P1610 Ã¢â‚¬” work rules).

The 2710p really works as a slate. I’ve had a number of slates in my past (and present) but I need a keyboard too frequently to go slate only again. L This is a sweet compromise. The hinge bulge exactly fits my hand and gives me a nice grip to hold on to. 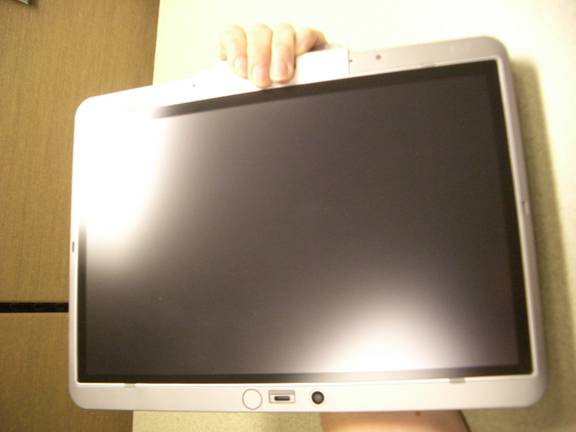 The weight distribution is excellent. There are no heavy spots and it seems to cradle nicely in my arms.

The back is nice and smooth and the plastic on the back is very soft, kind of suede-like. It has never felt too hot. My P1610 feels much hotter, as does my TC1100 in slate mode with no keyboard. 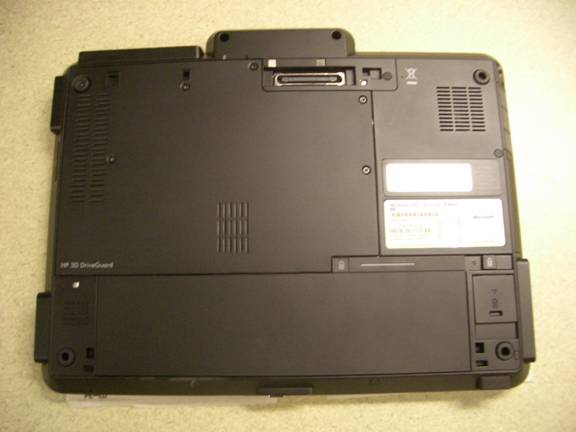 I was never a big button person, so I don’t miss the buttons at all. The two I used, I still have Ã¢â‚¬” Control-Alt-Del and Screen Rotate. The buttons are recessed and pen based; you stick your pen into a small hole to push the button. They work fine, but they’re only accessible in slate mode since they’re on the hinge side. The Q Menu button on the top edge takes care of my other needs, like brightness. 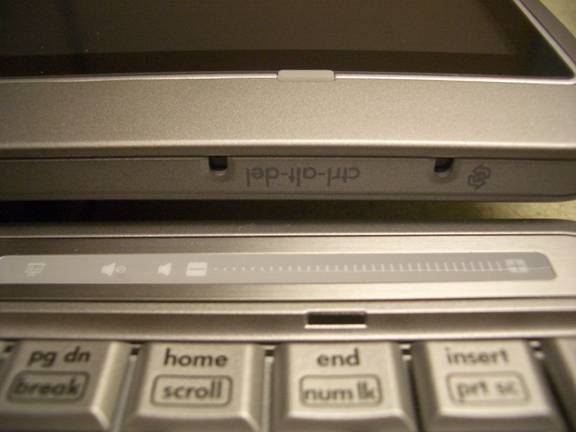 Also visible in this picture are the touch controls for Volume, Mute, and Presentation Mode. More on those later.

Very good. I did a test of battery life in my Saturday class. My exact usage was:

Settings: Brightness at ~50%, WiFi on and connected, Bluetooth on

So I had about 3 hours 10 minutes of actual battery usage plus about an hour of standby. That was with barely battery conserving settings. I had WiFi on and was using it and Bluetooth was on but not connected. Screen brightness at 50% was plenty bright enough for a classroom Ã¢â‚¬” in fact on Monday’s class I turned it down a bit.

The really nice thing is how fast it recharges. I got back to 50% in only about 40 minutes and nearly a full charge in an hour and a half. That’s handy. My P1610 takes forever to charge.

Trackpoint: I also don’t like the ““eraserÃ¢â‚¬Â style mouse device. Give me a trackpad anyday! However, they did a good job with this one. The eraser on my P1610 gives my fits and I hate it. This one isn’t too bad. The actual eraser is a cup style and it seems to be more responsive, without being too responsive. It walks the line well.

Pen: It’s a bit short, but feels good and has a decent diameter. Has an eraser end and a side button as well as a pen clip. The pen garage is my biggest complaint. It’s the kind where you push in the pen and it pops out, just like on the TC1100, except that this one seems to get confused sometimes and doesn’t like to push in right. Sometimes when I’m putting the pen back I have to push it in 3 or 4 times before it seats properly. However, it has never come out at the wrong time like the TC1100 pen used to do

It is a real fan, so this is not totally quiet. It was only noisy when it was installing the OS during the first power on. Since then, the fan has run, but ambient noise has always been at least as noisy, even in my classroom. Quieter than my TC1100, probably about the same as the P1610.

Works great. I had a little difficulty getting used to having it on the side of the screen, but it works fine. The software seems at least as good as Omnipass.

I’ve only used it to read business cards, but what a whiz-bang feature! Takes beautiful shots of business cards and imports directly into a card app, which will then export into Outlook. Very slick and very easy to use. Worked on all of the cards I tested except the Japanese one. J Even on the Japanese card, it got the company and the email address, so I was impressed. I’m going to try to find someone with whom I can try the video conferencing. Maybe Rob, once he gets his 2710p. J

The keyboard light is a cute feature, although I don’t really know how much I’ll use it. It feels just a bit fragile when you push it in.