The HP Compaq smartbook known as the Airlife 100 has been posted on the HP site. No availability info but the specs are there for your perusal. Looks pretty slick, especially the inclusion of a touchscreen and “Compaq touch experience” OS. 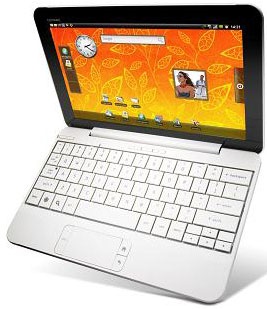 Snappy chipset with enough RAM to keep it that way. I admit a standard resistive touchscreen is nothing to get excited about, but we’ll have to see how well it works with that “Compaq touch experience”, presumably a UI overlay on the Android OS. (Expect “gorilla arm” syndrome to kick in.)

Based on what people are seeing with the iPad, I’d expect it to run all-day on the 28 Whr battery, a tad higher than the iPad’s 25 Whr battery. I’m sure the two will be pitted against one another soon enough.

Via myHPmini.com by way of Engadget