After lukewarm success with the Slate 500 to the enterprise market, it was believed that HP would be putting all of its efforts into webOS to make the TouchPad a success. However, given that the well received webOS software has not gained traction in the marketplace, it appears that HP is reversing course and is banking on Windows to launch the Slate 500’s successor, the Slate 2, ahead of Microsoft’s commercial release of Windows 8, which will be more optimized for touch and the tablet computing form factor. 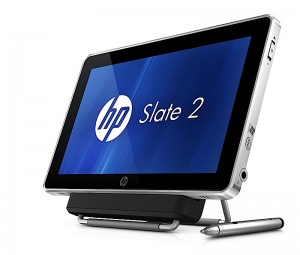 The new tablet retains the 8.9-inch form factor of the original Slate 500 as well as the active digitizer stylus. New to the tablet is the inclusion of a Swype software input keyboard, which allows users to swipe across different letters on the keyboard to form words without having them lift their fingers off the screen. Also, the Slate 2 will come with an updated Intel Atom Z670 processor and a lower entry level price point of just $699.

With a 32 GB SSD, improved 6-hour battery life, and better performance, the device will be available later this month. The Slate 2 will have a front-facing VGA webcam, a rear 3-megapixel camera, and SD card slot.