HP is no stranger to tablets, and while the company’s WebOS tablets failed to take off, there is a long history of WIndows tablets that the company may be able to leverage to attract businesses users to the new HP Windows 8 slate.

The HP ElitePad 900 is a 10.1-inch tablet with a 16:10 aspect ratio and Corning Gorilla Glass 2 for added durability. The 1.5 pound tablet is 9.2mm thick. That’s slightly heavier and slightly thinner than the iPad 3rd Generation. The back of the tablet is made with aluminum. 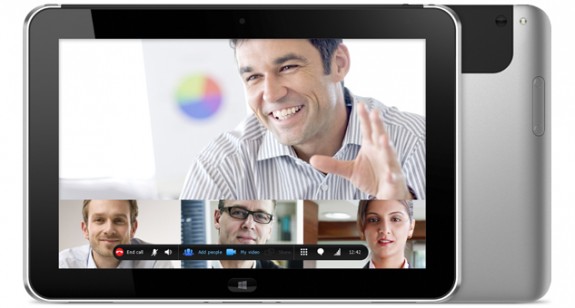 The HP ElitePad is a business focused tablet with pen support.

Inside HP says the ElitePad uses the latest Intel mobile processors, but doesn’t offer specifics. With the Intel chips inside, we can expect a full version of Windows 8 with support for applications that require a standard Windows OS. While the iPad and Android tablets are attractive options for some businesses, HP hopes to cater to businesses that need a mobiel Windows environment.

The ElitePad includes a number of accessories to extend the usability of the tablet. There are no prices for the accessories.

The HP ElitePad 900 also includes a rear facing 8MP camera and a front facing 1080P HD video camera. The tablet features an app to trim and orient photos of a whiteboard to quickly capture meeting notes. The tablet includes the option to print wirelessly to ePrint enabled printers and a wireless hotspot app for sharing an Internet connection.

HP includes support for BIOS protection, security management and drive encryption as well as other security features. The tablet is fully serviceable, so IT techs can gain access to the display panel, battery, motherboard and chassis.

The HP ElitePad is set to arrive in January, alongside competition such as the Microsoft Surface tablet, but no pricing is yet available.