Finally! Another excuse to post a new “I thought you were dead” graphic for the HP Slate, now suspected of being a new tablet called the eStation Zeen that’s passed FCC certification. Or is the Zeen really a different Android-based tablet for eReading? Or is it something else, something… greater? 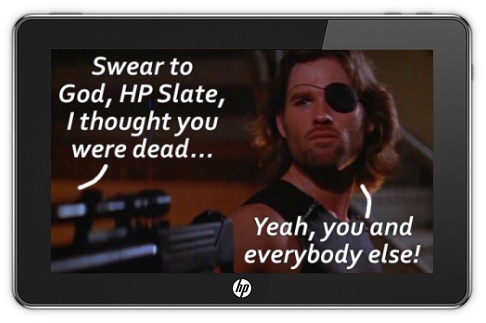 From the movie "Escape from New York"

Okay, it’s probably not something greater. Engadget dug up the goods earlier today from the FCC, though with little more than a name and back panel line drawing. Doesn’t really strike me as being the HP Slate, and further reports support that. Their additional sources claim the Zeen is actually Android-based tablet intended as an eReader that can dock with HP printers as interface units. If true (and the name really lines up with that idea), this would be a big step forward toward improving printer interfaces, which I think are in serious need of a makeover. They also get the impression the device is still pretty rough. Doesn’t sound like we should get too excited over this yet, but we’ll wait and see if and when things start to materialize.

Side note: I’m all out of pop culture “I thought you were dead” quotes, and more likely than not, there will be a few more HP Slate stories between now and release. Any ideas for more quotes will be welcomed.