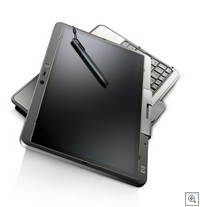 Yesterday I spent some time talking with HP Product Manager, Jeremy Brody, who is in charge of HP’s EliteBook series of mobile devices including the newly announced 2730p Tablet PC and the 2530p, as well as the 6930p. We talked about the new features on the 2730p and the 2530p, but the info that leads this post is that on the HP EliteBook 6930p, HP is going to begin touting 24 hour battery life shortly. According to Jeremy, this comes from continuing advances that HP is making in improving battery life, but is also due in great part to including the new Intel SSDs that have just been announced at IDF. Jeremy says that in his opinion the the advances with this new round of SSDs are certainly worth the price differential. Without the Intel SSD they are looking at claims of 15 hours of battery life, so that’s quite a jump. I asked Jeremy if he was ready to take the heat by making a claim of 24 hour battery life, and after a chuckle, he said he was.

Now, I don’t want Tablet PC fans to get too excited. Note that this claim from HP is focused on the EliteBook 6930p. That said, HP is going to be including the new Intel SSDs in both the 2730p Tablet PC, (the successor to the 2710p which is pictured) as well as the 2530p and hopefully be shipping those configurations sometime in September. We may be looking in the neighborhood of 7 hours of batter life with the 2730p Tablet PC with an SSD option. Of course when they ship depends on Intel as well. Keep in mind that the 2730p Tablet PC also has that great battery slice option to extend battery life. No prices are set yet, but we’re looking at the cost of adding the SSD to a configuration somewhere in the $800 to $1000 range at this point.

Jeremy and I talked quite a bit about how HP works with uses and listens to their needs. Some examples of this that are readily noticeable include adding the trackpad to the 2730p Tablet PC and fixing the pen so it doesn’t fall out. HP seems dedicated to the 2730p Tablet PC form factor, which I’m glad to hear. It is a great design.

Some other interesting info from our conversation includes: