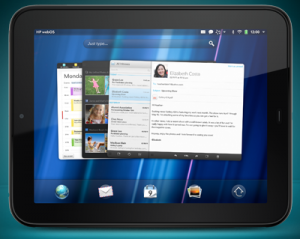 Life isn’t fair. We all know that. Or at least we should. For Tablet makers you could argue that it is not just unfair, but cruel and unusual punishment. Apple has such an long lead in terms of its iPad in so many categories, it is almost like they need to need to somehow prohibit Apple from selling the damn things before they have a chance. Wait a minute. I think Samsung tried and failed at that.

There are two things at play here. First, everyone trying to play the game is so anxious, and I hope so passionate, about what they have created that they seem to have developed collective blind spots as to what the iPad offers. Second, gadget bloggers and reviewers are doing what comes naturally and writing their reviews comparing new Tablets like HP’s TouchPad with point for point comparisons to the iPad. You can say that is unfair. You’d probably be right. But it is what it is.

In reading over a list of reviews this morning the biggest conclusion I can draw is that HP just unwittingly sold a bunch of iPads. The reviewers pretty much unanimously have said that this first webOS Tablet doesn’t stack up or can’t  be recommended by comparison. But HP, like others, had its own hand on the trigger of the gun pointed at its foot. When, I ask, when will we see a new Tablet released with “coming soon” not listed as a feature, or an apology for missing features? Good grief, folks. We’ve gotten to a point with these incomplete feature releases where it sounds like a broken record. Emphasis on broken.

We’ve listed a round up of the reviews that you can read yourself. What we won’t do, but probably should do, is list a round up of reviews of previous reviews of products from RIM, Samsung, Motorola, and others and show just how similar these reviews are. If some of these folks weren’t writing these reviews of the different products, you might think someone was doing some plagiarizing the similarities are so blatant. I won’t even begin to talk about how many of these reviews waste space on the obvious “the lack of Apps.”

But, lay the blame or responsibility where it belongs. HP seems to have followed the other Tablet wannabe’s right into the same trap. They pulled that trigger and now are going to have to start their eagerly anticipated leg of the race limping instead of running. Yeah, yeah, I know it is still early. But, I have to say, given the large bet HP has placed on their webOS venture, the only one counting chips at the moment is Apple. Heck, even Microsoft is probably feeling like it has a second (third? fourth? fifth?) chance.