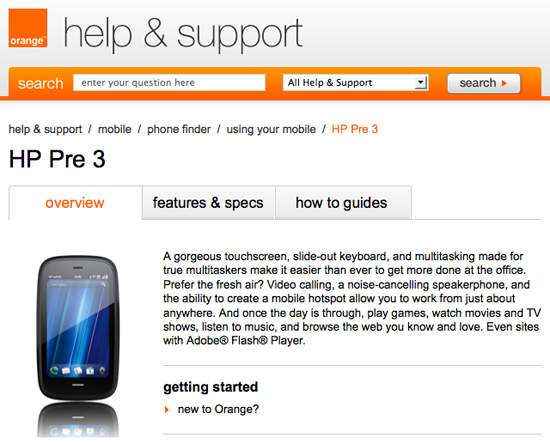 UK wireless carrier Orange has posted the support pages for the HP Pre 3, a webOS smartphone that was initially unveiled in February alongside the HP Veer 4G and the HP TouchPad. It’s unclear what the delay is that’s holding back the third-generation Pre from launching, but whatever the case it appears that a launch may be imminent if the support page has gone live on Orange UK.

The page does reveal a number of changes to the device since it was initially introduced. Most significant is the fact that the Pre 3 will now sport a dual-core 1.2 GHz processor rather than the 1.4 GHz CPU that the device was initially announced with.

The device will come with either 8 GB or 16 GB of on-board storage and will have a high resolution WVGA display.

The device is expected to begin launching by the end of this month.