Although more of a media machine than a real Tablet PC, it looks like HP is refreshing its tx Series convertible Tablet PCs, along with a number of other announcments. The tx1000 captured a lot of attention on its release, so it will be interesting to see if the new tx1400 will do the same. Again, more of a touch enabled media computer than a real Tablet PC, the tx1400 is powered by a 2.2GHz AMD Turion 64 X2 TL-64 processor and 2GB of RAM. The tx1400 also comes with 802.11n built in. 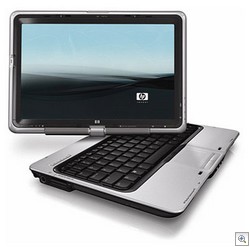 JR.com already has this up for sale on their site priced at $1199. I’m not finding anything on HP’s site on this at the moment, but we’ll update the post when we do.