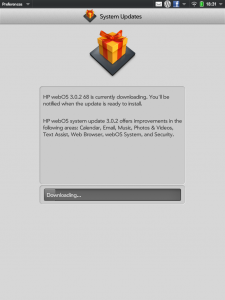 HP promised that an update for webOS 3.0 was coming in July. August 1 technically isn’t July, but when you’re dealing with these kind of things, I guess you might want to call it close enough. Word was that it would begin trickling out this morning. The Over the Air Update (OTA) update finally hit my TouchPad tonight around 6pm or so EDT.

As far as I can tell the OTA update went off without a hitch. Total time to download and perform the update took about 48 minutes. Once the update has downloaded, unpacked, and installed, your settings are restored from the backup. One thing to note if you’re a webOS user: webOS has a backup service that will back up your data, your apps, and your settings. You might want to force a back up if you haven’t done so already just to be on the safe side.

So, does the update perform miracles? It’s really too early to tell substantially, but I will say that in early testing (I have to get on the road and head north to Pennsylvania tonight for an early call in the morning) both the browser and moving between Apps seem snappier. I’ll delve deeper in the next day or two and report back. As you can see from the picture, HP gives you some information on the update screen, but not much.