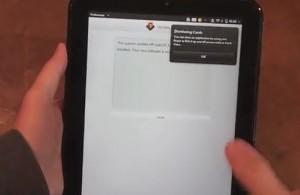 But, for those who still have a TouchPad, you’ll be glad to know that HP has released an update to webOS. The update takes the OS to v 3.04 and among the usual bug fixes and stability improvements it boasts a new camera App, Bluetooth improvements, and better messaging. The update supposedly also allows for connectivity to non HP phones.

If you’re using a TouchPad, let us know what you think of the update in comments.