Harry McCracken at Technologizer ran into Phil McKinney, CTO of HP, at The Big Money’s Untethered conference, a meeting about “profitable media in the tablet era.” You’d think that McKinney, one of the speakers at this event about tablets would be eager to speak about HP’s tablets, specifically the Slate, but not so much. 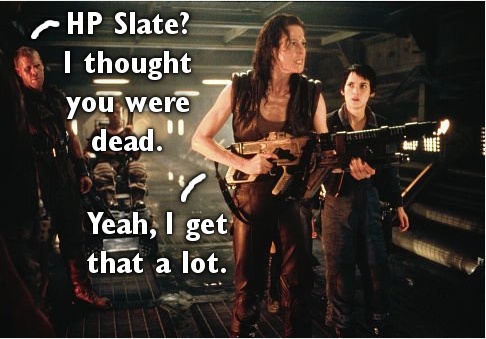 Without naming names, McKinney pointed out that existing operating systems installed in new types of devices comes with drawbacks. Of course, Microsoft recognized that issue when they first got into the tablet market, splitting off an edition of Windows XP for Tablet PCs. But rather than continue on that path, they folded the functionality into the premium version of Windows Vista. So I think the drawbacks are less about using existing systems than systems not being tailored or redesigned for new form factors.

At Q&A time, Harry asked about the HP Slate, but Phil declined on the basis that the Palm deal has not been finalized. Harry makes a good point that, after months of hyping their Slate, it seems bizarre for them to go completely silent on the matter. On the other hand, if McKinney’s citing the Palm buyout as the reason he can’t comment, then he’s pretty much confirmed the plan is to run webOS on the Slate. Does that mean there won’t also be a Windows 7 Slate? No, but the development of that project isn’t necessarily connected to webOS, unless they’re purposely tying its fate to whether or not they get webOS.

In the meantime, I would point out that HP already sells a pen + multi-touch tablet that regularly discounts to well under $1,000 starting price. The HP Touchsmart tm2 has been one of our deals of the day a half dozen times, dipping as low as $700, same as the 64GB Wi-Fi only iPad. So let’s not get weepy and worry if “there won’t be some sort of Windows-powered HP tablet someday.” They have one now and have had them for years, including a slate.