Some dude (that’s not a slam; the guy is pretty anonymous) has posted a YouTube video showing a prototype of the mythic HP Slate. He offers a once over of the exterior and a brief look at the basic software. 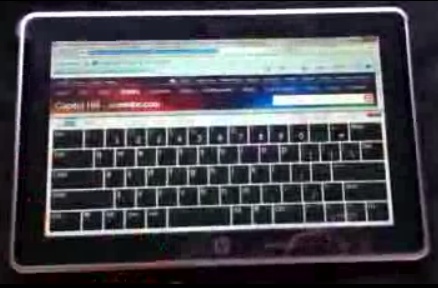 Not a whole lot of new revelations in the video. The boot speed is impressive due to the SSD. It does include the ctrl-alt-del button that was once required on Tablet PCs (lot of commenters on Gizmodo and YouTube have left derisive opinions on this). And despite past mentions of pen input, there is no pen garage anywhere. While it may have an active digitizer, it lacks a built-in place to store a pen. He also describes a covered central port as being USB, but I suspect it’s the docking port that is supposed to enable USB and HDMI connections.

Of course, this is a prototype, so don’t take any of that as final. What’s unexplained is how this seemingly random guy got his hands on the prototype and was allowed to demo it like this. I can only hope this means the Slate is closer to release because I’m getting real tired of commentators looking at this like they’ve never seen a Windows-based slate before (even if it is true for them).