Engadget got a hold of an HP presentation that compares the forthcoming HP Slate to the iPad. We saw a nice video demo of the HP Slate earlier today, but this is the first time we’ve seen such detailed specs. The HP Slate has some very compelling features, but I’m not sure if it’ll be enough for Apple fans to trade in their iPads. The big news is that there will be pen/digitizer support.

It’s still unknown what kind of digitizer HP is utilizing, much less how it’ll perform, but this has me pretty excited. I doubt the inking experience will be anything close to what we’re used to seeing in professional tablets, but at least HP’s throwing us a bone here.

The HP Slate will be priced at $549 and $599. The device will run on a 1.6GHz Intel Atom processor, 1GB of RAM, Intel UMA graphics and Windows 7 Home Premium. Based on those specs, you can can expect performance similar to the average netbook. A custom HP touch-optimized interface will make it easier to use the multi-touch device. 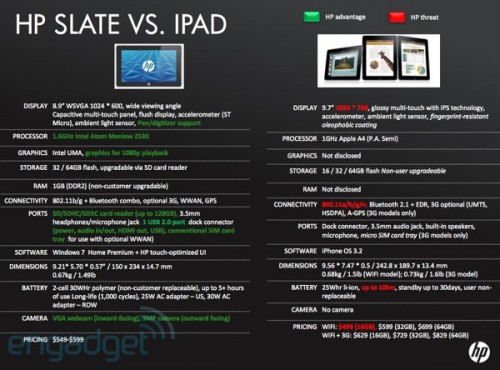 The HP Slate will have a 30whr 2-cell battery that will last for up to five hours. This is half of the battery life you can expect out of an iPad. Much to my surprise, the iPad’s battery is lasting for an incredibly long time.

When I was considering buying an iPad, I couldn’t figure out when and where I’d use the thing. Now that I own one, I’m still trying to figure that out. But with the HP Slate, the answer to that question is much clearer. I see the HP Slate as replacing the netbook for me.

If you take a close look at the presentation slide, you’ll see that HP’s highlighted the advantages of the HP Slate in green and the threats to the HP Slate in red. In my opinion there are three threats not on the slide that HP should really pay attention to:

1) iPad applications: HP’s clearly addressing many of the concerns people have in terms of hardware specs, but where’s the software specifically built for the device?

2) The iEcosystem: There are countless vendors pushing accessories and peripherals that can be used with the iPad. Every ad for a car charger, case or stylus is an ad for the iPad. Who’s going to generate buzz for this thing besides HP? I hope they have some strong partnership announcements lined up.

3) Ease of Use: The iPad is about as simple as it gets. Hand it to a kid or a grandma and they just get it. Will the HP Slate offer a streamlined experience beyond the touch UI? Or will it be a typical Windows experience wrapped in a nice cover? People need to be able to pick up the HP Slate and do something cool/fun within a minute or less when they see it for the first time.