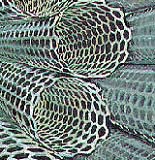 Moore’s Law might get shaken up a bit with news that Hewlett Packard is gonig to report an advance in adaptabile circuitry featuring the use of nano-technology. HP isn’t the only concern working on nanotechnology and it sure sounds intriguing.

““We’ve demonstrated a credible means for shrinking circuit density without shrinking transistors,Ã¢â‚¬Â said Stan Williams, director of quantum science research at H.P. Labs. The researchers have simulated the design in the lab, and they are starting to build test chips in a laboratory in Corvallis, Ore. They hope to have a working prototype within a year.

The Hewlett-Packard researchers, who are based in Palo Alto, Calif., have extended the Stony Brook concept and applied it to a class of computer chips known as field programmable gate arrays, or FPGA. FPGA chips are widely used in the computer industry to design prototype circuits that can later be manufactured less expensively.

Some of the examples cited in this New York Times article include cellphones that can be wirelessley upgraded, and developing ultra-cheap memory chips.