HP has begun sending out emails to customers that have backordered HP TouchPad tablets informing them that the device will be shipping at some point within the next 6-8 weeks. As many of you know, HP put the webOS tablet up for a mere $99 after it was announced that the company would be discontinuing it. And then, shortly after it was put on sale, the device sold out at HP.

This of course meant that many people who had placed orders were notified that the device was on backorder until HP could get around to satisfying the insane demand it brought upon the tablet. 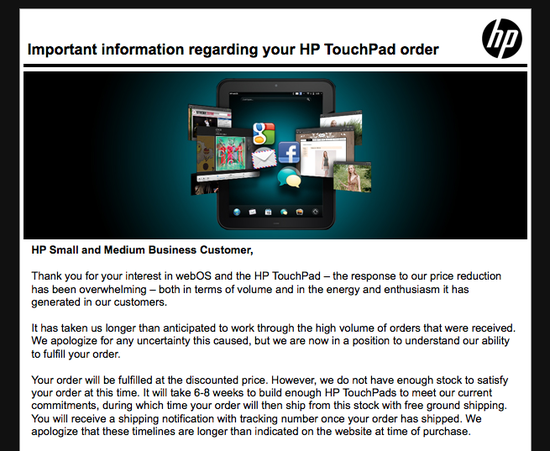 And it’s looking like October is going to be the month when it finally is able to get the delayed orders out to customers.

The orders will still be fulfilled under the discounted price which means that if you have one on backorder, you’ll still be getting it for $99 when HP finally ships it off to you. Ground shipping will be free.

Those that are upset about the delay are able to cancel their orders if they do so within a week.