Right now, it’s unclear how long this teaser page for the HP TouchPad has been up for, but this is the first we’ve seen of it and so it might be the first time many of you have seen it as well. 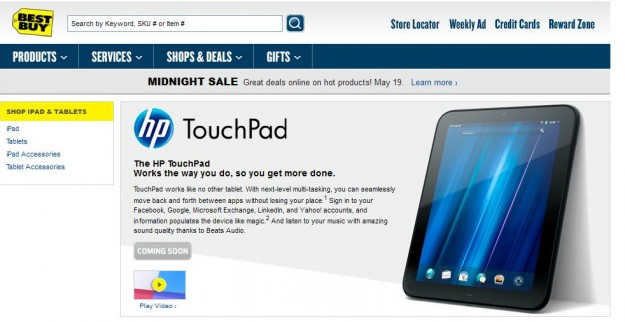 In any event, HP’s upcoming tablet device has appeared over on Best Buy’s website and right underneath a short description of the device, it states that the device is going to be coming to the retailer soon.

Sadly, the teaser page doesn’t give us a window into how much the webOS tablet is going to cost when it does in fact hit shelves. There have been rumors that it’s going to be starting at $499 but those whispers haven’t yet been confirmed by HP.

An exact release date also remains unclear. The TouchPad recently passed through the FCC, so we know it’s nearly ready to go, but all we have to go on right now is a possible June window which fits right in with HP’s official summer launch date.

We’ll keep an eye on this page and let you know if anything changes.