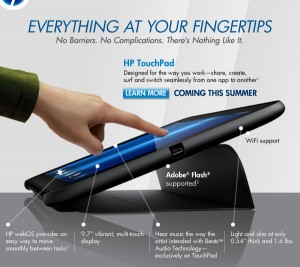 HP has posted a cover for the TouchPad webOS tablet online, which shows that the cover can be folded onto itself to be used as a stand for typing and using the tablet at an angle. The usage paradigm is similar to Apple’s iPad 2 Smart Cover w

here that cover can also be folded onto itself in a triangle to prop up the tablet. However, unlike the Apple Smart Cover, HP’s TouchPad cover is integrated into a case, which provides protection for the back rear side of the tablet, along with the sides of the tablet; Apple’s cover is just s sheath that protects the screen and attaches to the aluminum iPad 2 via magnets.

Not much other information is revealed from the image. HP says that the tablet will be available this summer and Adobe Flash, in beta, will be supported.