The HP TouchPad is a new Tablet from HP which runs the Palm WebOS software that HP hopes will deliver a solid iPad alternative. The first HP TouchPad reviews have gone live and according to early reviewers, while the TouchPad is able to nail some things, the total package isn’t ready to take on the iPad just yet. 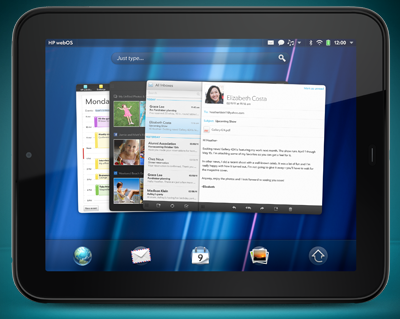 The Touchpad runs WebOS, a new tablet operating system which many users like. Unfortunately, WebOS is new and is lacking access to the same number of apps as the iPad, a problem that also plagues Android tablets.

The HP TouchPad comes in 16GB and 32GB sizes and retails for $499 and $599. You can purchase the TouchPad starting July 1st.

The HP TouchPad doesn’t deviate from what we’ve seen in terms of other tablets. In early HP TouchPad reviews, reviewers have compared the TouchPad’s design to the first iPad, a flattened iPhone 3GS and a fingerprint magnet.

the tablet’s hardware is bulbous and heavy compared with the iPad 2 or the svelte Samsung Galaxy Tab 10.1, an Android tablet. Worse, it’s missing some key features common on the other tablets, like a rear camera or even a camera app for taking videos and still pictures. It has a front camera that can be used only for video chats.

The HP TouchPad is thicker than the iPad 2.

Now, from a hardware-checklist perspective, the TouchPad doesn’t get off to a good start. It’s the same size as the iPad, but it’s 40 percent thicker (.75 inches thick) and 20 percent heavier (1.6 pounds) — a bitter spec to swallow in a gadget you hold upright all day long.

A soft touch coating would have gone a long way to improving the feel of the device (something along the lines of what the company has done on the Pre 3) — or HP could have simply used a better material for the housing. It’s not a tragedy, but I walked away underwhelmed with the design on the tablet — it’s nice to look at, but does nothing to stand out from the pack. 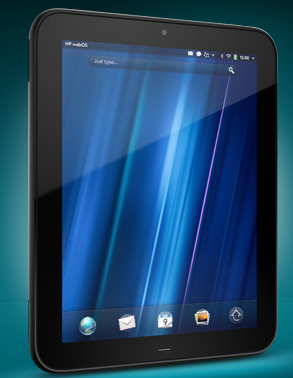 As we said earlier, it’s a 9.7-inch, 1024 x 768 IPS panel up front that matches the iPad 2 pixel-for-pixel and doesn’t disappoint when it comes to other important aspects of viewing. Contrast, viewing angles, and brightness all impress, delivering plenty of light for bright or dark rooms and angles wide enough to make sharing with a friend a cinch.

WebOS is one of the big draws of the HP TouchPad tablet. This operating system has been available on phones for some time and has earned a collection of loyal followers who are looking forward to the WebOS tablet debut. WebOS is often praised for the quick multitasking and the tablet version on the HP TouchPad is no different.

The original “cards” webOS multitasking system was running rings around rivals back when the first Pre was launched, and it’s still impressive today. Rather than fill the homescreen with widgets and icons, app launching is done either from a shortcut bar running along the bottom of the screen or a dedicated menu, and the bulk of the space is used for webOS’ cards. Each card represents an open app or a part of an app: a browser tab, for instance, or separate views of your email inbox and a new message you’re partway through writing.

Bad news for TouchPad fans, performance is reportedly on the Sluggish side, though we hope HP can tweak this with an OTA update down the road. The good news is that the multitasking portion of WebOS is reportedly snappy.

As gorgeous as the software is on the TouchPad, I’m sad to say that performance leaves much to be desired. With a dual-core 1.2GHz Snapdragon processor, this puppy should be a screamin’ demon. Instead, I find that some apps are slow to launch — though the worst culprit, Google Maps, has thankfully been replaced by Microsoft’s Bing Maps in webOS 3.0 — and the device bogs just as often as lesser webOS devices. Scrolling stutters often in a number of applications, and the UI has a tendency to be a bit jerky at times. I will say, however, that multitasking seems to have a minimal impact on performance. In other words, I experienced the same level of jerkiness with just a few apps open as I did with 10 apps open

My biggest beef with the TouchPad is performance. It has a 1.2GHz dual core Qualcomm Snapdragon CPU and 1GB of RAM, so it’s got the hardware to really move, and there are times when it flies between tasks and apps and runs great. However, there are also times when it unexpectedly chugs, freezes, or gets really slow. I never had it crash, but there were 8-10 times over the period of one week where it slowed to a halt. That’s too many. I suspect this is a software issue and asked HP about it. The company responded that performance improvements are part of an over-the-air update for the TouchPad that will arrive after launch 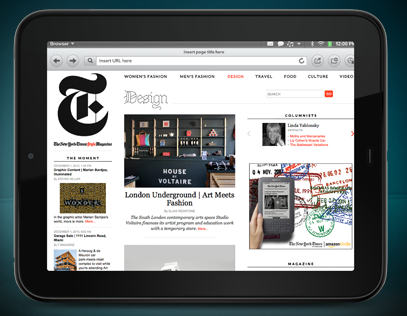 There have been some big changes to the browser for webOS 3.0, and while you won’t necessarily find anything heart-stopping, there are a couple of nice points worth noting. First off, Flash is on board and mostly functional on the TouchPad, and I was able to play back Hulu clips and shows with little trouble. Sometimes video would stutter or freeze at the beginning of play, but that usually cleared up quickly and made for fairly decent viewing. The browser has also been redesigned for use on the bigger screen (and sans gestures) meaning more of the controls are exposed, which I found to be more to intuitive than previous versions. Performance was snappy though not quite up to par with the iPad or even Honeycomb levels when it comes to Sunspider testing (the TouchPad came in at 4040.6ms overall), but it’s quick enough that it doesn’t feel like a drag in use.

Sadly, the poor app selection will continue to plague the TouchPad in the tablet’s early days. As reviewers note there are only 300 WebOS tablet apps on the market right now and while there is a music store coming at launch, consumers ahve no way to watch Netflix or purchase movies or TV shows. Engadget has a run down of notable apps that launched with the HP TouchPad including descriptions, screenshots and evaluations.

Somewhere the webOS experience falls well short, however, is in third-party apps. The App Catalog may have been around on the first Palm handsets to hit the market in June 2009, but over two years later there are still a mere 9,000 or so smartphone apps to choose from. The TouchPad has an even more limited selection: “a minimum of 300″ titles at launch, HP tells us. Around 70-percent – or approximately 6,200 – of the apps intended for webOS smartphones will reformat to suit the higher-resolution, 9.7-inch display, a proportion that’s steadily increasing as more developers get to grips with the Enyo framework. Enyo is the new SDK, which allows apps to be designed to rescale appropriately to different form-factors, so that the same software can run properly on both smartphone and tablet. 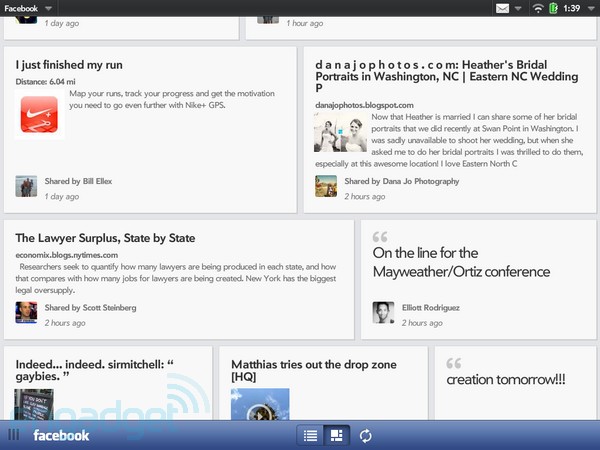 This first TouchPad has no app, such as Netflix, for streaming TV shows or movies (though its Web browser, unlike the iPad’s, can run Adobe Flash and can stream videos via the Web). Its version of the QuickOffice productivity suite, unlike the same product on the iPad, can’t edit documents, but merely displays them. My test unit lacked stores for directly downloading TV shows, movies and music. H-P says a music store will be available at launch and a video download store “shortly” after launch.

The HP TouchPad includes HP’s Beats Audio, which is supposed to deliver a superior sound. From the early reviews, the TouchPad has good audio, but there are some issues with speaker placement and a low volume upper limit.

As noted, the TouchPad has a set of stereo speakers (only truly stereo when you hold the device in landscape mode with the home button on the right). The Beats-related sound is quite good when you’ve got the tablet in the right orientation. The stereo field was particularly noticeable with some of the music I listened to on the unit, even when the TouchPad was laying flat on a desk. It’s not going to thunderously rock anyone, but it’s some of the better audio output that I’ve heard on a tablet or phone. In particular, sound was crisp and clear when using the device for phone or Skype calls (more on that in the software section). One knock: when I held the device in portrait, I found that I covered the speaker at the bottom with my hand inadvertently, causing audio to be muffled.

The HP TouchPad delivered roughly 8 and a half hours of battery life for all reviewers. While this is less than the iPad 2’s 10 hour battery life it is enough to get you through a typical workday or stretch you through the good part of a week with casual use.

After reading through numerous HP TouchPad reviews it’s clear that the first generation HP TouchPad didn’t deliver an iPad killing tablet, but rather a valiant first generation showing. The good news is that HP is reportedly in this for the long haul and can hopefully catch up to the iPad and Android tablets in the next generation. In the short term an update to address performance and more apps certainly won’t hurt.

Walt Mossberg shares his opinion on the HP TouchPad, which “needs a reboot.”

Vincent Nguyen of Slashgear shows off the HP Touchstone technology and the TouchPad keyboard.

Engadget shows off the Touch to Share feature that allows you to share easily between your TouchPad and WebOS phones.

The Associated Press isn’t to big on the TouchPad in this video only review.

The HP TouchPad demo from HP gives a feature overview, showing off what HP thinks will set the TouchPad apart.

HP calls on boxer and politician Manny Pacquaio to help sell the TouchPad as a device that can stand up to the bigger, favored, competition.