I just got back from a meeting with HP and got to take a brief look at the TouchSmart tm2 convertible. Warner ran through the specs in an earlier post and posted a few photos that HP provided. Those photos don’t do the computer justice though.

HP’s killed the shiny black plastic and replaced it with engraved metal. The tm2 feels better in the hand than the tx2. I like the fact that the six-cell battery doesn’t jut out the back of the tablet like previous models. One thing that may bother some users is that the rear of the base (near the hinge) is much thicker than the front of it.

HP’s TouchSmart tablets are the only ones sold at Best Buy and the tm2 is going to do a much better job of representing the Tablet PC world to consumers than its predecessors. 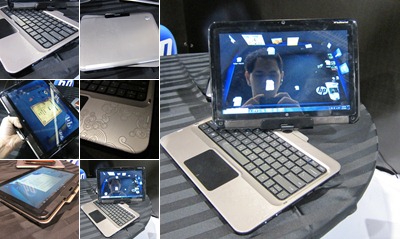