The folks over at Engadget have reportedly gotten a hold of more complete specs for the upcoming HP UMPC 2133. Many of the rumors have been “confirmed” by this information, including the VIA C7-M processor and, more surprisingly, an option for SuSE Linux installed.

With prices listed from $549 – $849, there’s a pretty large range of affordability. The $849 version may be an anomaly – it’s listed as “Regional” and at a price higher than the Vista Business model with more RAM.

Price sheet and specs after the Read More. 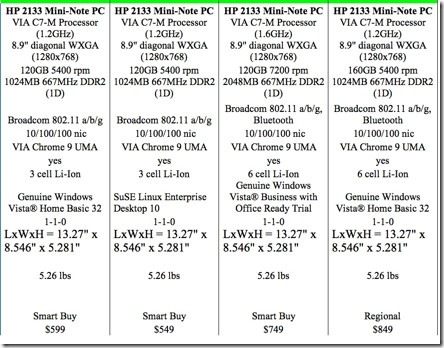