We mentioned the HP UMPC the other day and now it looks like Engadget has gotten their hands on some pictures and specs on the device. The HP Compaq 2133 is called a “lifestyle accessory” according to Engadget, and comes with a 8.9 inch screen running a 1366×766 WGA resolution. Other specs include and ExpressCard slot, WiFi, 95% full sized QWERTY keyboard, webcam, and an optional SSD. According to Engadget it will run Vista or Linux. 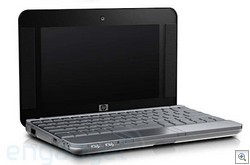