Watch out fashion world, the Netbooks are coming. At the Vivienne Tam’s fashion show in New York City’s fashion week, HP unveiled a version of the Mini-Note all dolled up to work with the designer’s fashion line. Called the HP Digital Clutch, it sports a red case with a Peony floral design as was inspired by the designer’s ““China ChicÃ¢â‚¬Â line. 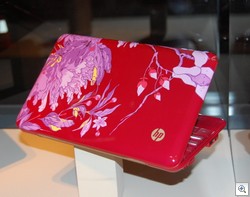 Now who would have thought we’d be seeing Netbooks as fashion accessories. 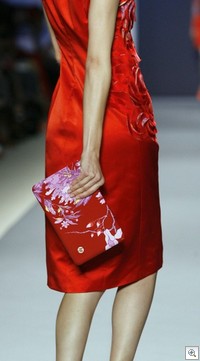 From an HP Press ReleaseÃ¢â‚¬Â

The HP Vivienne Tam Special Edition notebook represents the first time a computer company has partnered with a globally renowned designer to create a notebook PC that offers all the style and power needed for a delightful technology experience. Tam also worked with HP to design the notebook’s accessories and packaging.

In addition to working with Tam on the new notebook design and accessories, HP today launched a fully integrated virtual experience to help fashionistas around the globe find design inspiration online.

HP has created a virtual catwalk, a designer tour hosted by Tam, and a “design bot” gadget inspiring users to dress up their computers with Tam-designed wallpaper, screensaver and icons all of which are available now in the United States and in early October worldwide.

The efforts were created in partnership with Glam.com and are available at tech-chic.com.