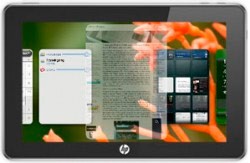 On HP’s earnings call yesterday,  executive Todd Bradley announced that the company will ship a consumer slate running Windows ‘soon’ and a webOS Tablet in early 2011.

HP’s been teasing us with its answer to the iPad all year long, to a point where anticipation is transitioning to yawns. For the first several months of the year, executives, including HP CTO Phil McKinney, were out pimping the slate in great detail and showing off. Prototypes were shown at partner events and videos were being pushed out. Here are a couple examples:

We were expecting a mid-year release that would sort of coincide with the launch of the iPad. Instead, it’s pretty much been radio silence since HP bought Palm at the end of April.

So what’s the state of webOS devices and the HP Slate/PalmPad/Hurricane? I expect HP to announce a Windows version of the slate, similar to the one displayed in the above videos, in September with availability this holiday season.  HP will likely introduce new webOS mobile devices within the next month that will be the first HP/Palm phone, a welcome deviation from its iPaq phones that haven’t had much success in recent years.  I think the  PalmPad webOS tablet will indeed launch in Q1 of 2011, but it will be sold alongside a 3G contract of some kind.