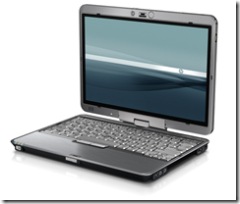 When HP announced the 2710p Tablet PC, there was a lot speculation around the future of the TC4400. Folks have been wondering if the 2710p would be replacing the TC4400. It made sense that HP would move in that direction, but up until today, I had not heard anything official from HP on that issue.

Well, I just got an email from our contacts at HP, and they have confirmed that the 2710p will be replacing the TC4400. So, if you have been considering a purchase of the TC4400 and don’t care too much about the 2710p, you might want to get that credit card out and start shopping. The TC4400’s days are numbered.

BTW: Our names are in the queue to get an 2710p evaluation unit, so we hope to get an InkShow video review produced just as soon as that sleek looking Tablet PC heads our way.