When HP’s Vice President and GM for Commercial Products declared recently that Tablet PCs “were not a mainstream device” and that there was no “horizontal usage” for Tablet PCs as a consumer device it got some attention. In posting about that statement, Rob wanted to know what the Tablet PC community thought in response. Here’s my $.02. If you ask me these statements sound quite a bit like backroom squabbling over allocating marketing resources breaking into the open. That’s speculation on my part, but I’m guessing reasonably accurate, given the many marketing mistakes that HP has made with their Tablet PCs.

Yep, there’s that word again. Marketing. As always, I maintain that it rests at the core of many of the woes that Tablet PCs have in gaining acceptance. Bozzo stated that Tablet PCs only accounted for 5% of HP’s volume. I don’t know what HP’s volume of sales are (although with the range of products they offer, 5% can’t be all that bad a number). I certainly do agree that vertical markets are going to be a big key to any Tablet PC growth and HP has done some good partnering on the education front to name one market segment. That said, I can’t help but think that HP, like many of the Tablet PC OEMs shouldn’t be poor-mouthing bad sales volume of their own products when they refused to position (read market) them to the consumer market with any discernible strategy at all. Gateway is a notable exception on that front. 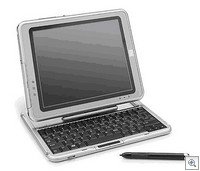 Let’s not forget that HP decided to nix what many feel was the coolest, and many argue the best, Tablet PC on the market in the tc1000 series. Instead devoting who knows how much to promote the less than “Wow” form factor of the tc4400. Even today on HP’s website you don’t find Tablet PC products listed under consumer or home office products but under business products. HP’s newest entry into the market, the Compaq 2710p is targeted as a business model, although from early info it sure looks like it could make an impact on the consumer level. But that is going to require spending some resources in that arena, and it sounds like those decisions have already been made. My hunch, don’t look for the Compaq 2710p on store shelves.

Speculating further, I think that Mr. Bozzo is letting margins define his marketing, as the consumer market has much lower margins per unit than can be had in the vertical markets. Nothing wrong with that as a business strategy. But, I don’t think it is instructive, or correct to devalue a market segment simply because you haven’t got a clue about how to position your own products within it.