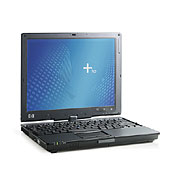 I was just over at Small Laptops and Notebooks checking out some comments they made about the X41 tablet pc video and noticed their posting of HP’s TC4400 press kit, their refresh of the TC4200 Tablet PC. As I talked about earlier, the major improvements to the TC4400 is the addition of CoreDuo processors, fingerprint reader, and the support of up to 4gb of ram.  Video is integrated Intel 950 chipset.

It’ll be available for ordering on May 22nd.

BTW: We’ve been running GBM for over two months, and I just now had to add HP as a hardware category.