The new  HTC Advantage program is a great enhancement to the new HTC One M8 that offers a free screen replacement, 50GB of free Google Drive storage and a promise of quick Android updates. I’ve already had the misfortune of cracking my HTC One M8’s display, but HTC stepped right in and promptly replaced my phone. In this review I’ll tell you more about my experience and how it compares to AppleCare+, Apple’s iPhone protection and extended warranty program.

Usually buyers have to wait a while between when a new phone is announced and when they can actually buy it, but HTC changed things up with the HTC One M8 by selling through Verizon stores the same day they announced the device at a press conference. I bought the phone that day and was very excited to use it as my primary Android phone. I didn’t have a case on my HTC One M8 because Verizon didn’t have the Dot View case in stock and I didn’t like the two cases they did have in stock. I figured I could order a case online and wait a few days without much risk. I was wrong.  Two days later I took my son to a San Francisco Giants game and dropped the HTC One M8 in the play area as I reached to grab my toddler from running away. The HTC One M8 fell about a foot onto concrete and the screen shattered. 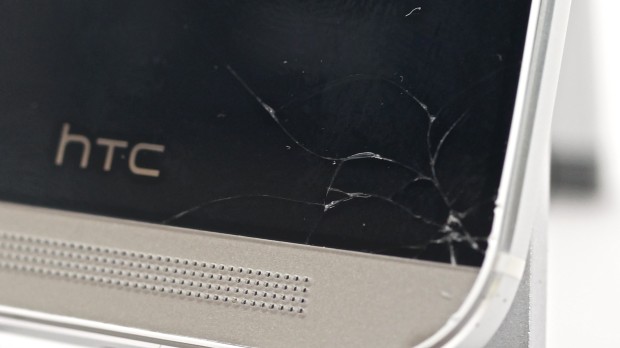 At first I panicked as I’d paid full price ($599) for the phone, but then calmed down when I remembered that the phone was protected by HTC Advantage, American Express Purchase Protection and Asurion, a Verizon partner that offers insurance. Three protection plans is obviously better than none and I was confident I could get my phone fixed or replaced through one of them without having to paying too much, if anything out of pocket). HTC Advantage’s damage protection lasts for six months. American Express, the card I use to purchase all of my gadgets, automatically covers damage and theft for the first 90 days and doubles manufacturers’ warranties to two years. Asurion costs $10  per month and offers the most protection, including loss, theft and any sort of physical damage, but there is a $99 deductible for each incident.

On Friday I called HTC’s customer service line and explained what happened to my new HTC One M8. The representative told me that  they could send out a replacement phone and a return label for my broken HTC One M8, but the process typically takes eight to 10 business days. I explained that I didn’t want to go that long with a broken phone and he told me that they could overnight me a replacement phone for $29 or send it by two-day express for $19.

I decided to pay the $29 fee so I could have it by Monday. The HTC rep emailed me a link so I could enter my credit card details and track the progress of my replacement. Unlike most people, I have multiple smartphones and can live a day, or even 10, without one of my phones, but I needed the replacement as soon as possible for my work here at GottaBeMobile.com. 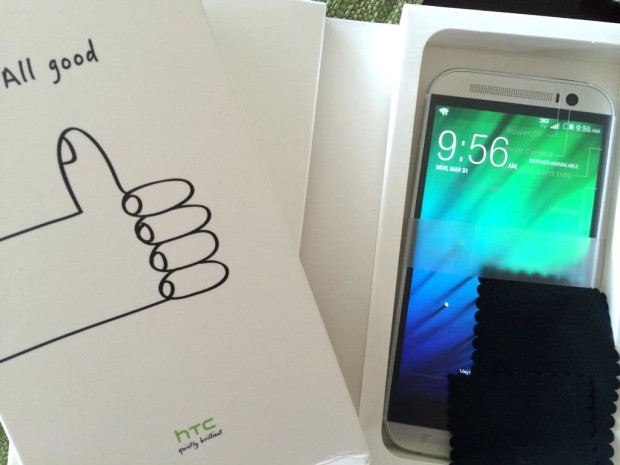 A UPS driver rang my doorbell on Monday at 9am and delivered a brand new HTC One M8 that was partially charged and ready to go. I was very impressed with how smoothly the whole experience went. I can afford the $29 rush fee and recommend it to anyone that can’t go very long without a fully functional smartphone.The eight to 10 day standard speed for replacements is just too slow and HTC should find a way to cut that time down for those who cannot afford the rush fee.

Another problem with the program is that HTC One M8 owners need to provide a credit card for the express replacement program. HTC holds $599, the full replacement cost of the HTC One M8, until they receive the phone and confirm that there’s nothing wrong with it except for the broken display.

While the HTC Advantage program is a nice freebie, there are some shortcomings that mean you should probably sign up for an insurance program through your wireless carrier or elsewhere. The HTC Advantage repair program is only limited to the display and you’re limited to one free replacement. Additional busted screens cost $200, plus shipping to replace.HTC won’t cover the cost of repairing damaged metal or internal parts, even if that damage happens during at the same time you crack the device’s screen. It doesn’t cover other common hazards like water damage.

It would be fantastic if HTC offered a protection plan of some kind that covered multiple screen replacements and other sorts of damage. HTC could model an enhanced HTC Advantage program off of Apple’s AppleCare+ program, which costs $99 and has a $69 deductible for damaged iPhones.

The AppleCare+ program and Apple’s in-store support is one of the many reasons why I still recommend the iPhone over Android phones to most people. Apple has an unfair advantage over Samsung, HTC and other phone manufacturers when it comes to customer service because of its extensive network of retail stores.

Take for example, the last time I had to replace a damaged iPhone. I brought my iPhone 5s to my son’s swim lesson so I could snap a few photos underwater. The OtterBox waterproof case failed and my iPhone 5s was destroyed. I went to the closest Apple Store, which was less than two miles from the swimming pool without an appointment. I explained what happened to one of Apple’s Geniuses and  offered a replacement after looking up my iPhone to make sure I it was protected by AppleCare+. I was in and out of the Apple store within 10 minutes and was able to restore the new iPhone 5s from a backup when I got home.

Apple’s AppleCare+ is a bargain considering it doubles the iPhone’s warranty to two years and covers up to two replacements regardless of what kind of damage you inflict on it.

Besides the screen damage protection, the HTC Advantage program also offers 50GB of Google Drive storage for two years. More storage is most certainly welcome, but Google just reduced its storage pricing. Now, 100GB of storage is only $1.99 per month and 1 TB is only $9.99 per month. The free 50GB included in HTC Advantage is most useful to Android users who are limited to the standard 15GB of free Google storage that all Gmail users get.

Another nice benefit of HTC Advantage is that it guarantees rapid Android updates for at least two years. We’ve seen too many good Android devices be neglected by manufacturers, languishing away on outdated versions of Android.  While HTC is somewhat vague as to how quickly it will push updates out to the HTC One M8 after Google releases them, it’s nice to see the company acknowledging this pain point.

While HTC Advantage isn’t as good as AppleCare+ when it comes to protecting the HTC One M8 from hazards, its $0 price point sure makes it attractive.