HTC reps are crashing Samsung’s Galaxy S4 launch event in New York today to show off the HTC One. At least three HTC reps are showing off the HTC one to members of the media and Samsung fans waiting outside of Radio City Music Hall in New York, where Samsung is set to unveil a new Android smartphone.

Up to 3,000 reporters, consumers and Samsung partners are expected to fill Radio City Music Hall for the 7pm EDT event. A large number of those attendees are lined up outside the auditorium already, with four lines just for members of the media.

HTC is taking the opportunity to introduce the journalists and tech enthusiasts to the  HTC One, which has yet to hit store shelves. Many journalists in line have flown in from far-flung locations such as Asia and Europe. It is the first time most of those in line have ever seen or touched the HTC One. 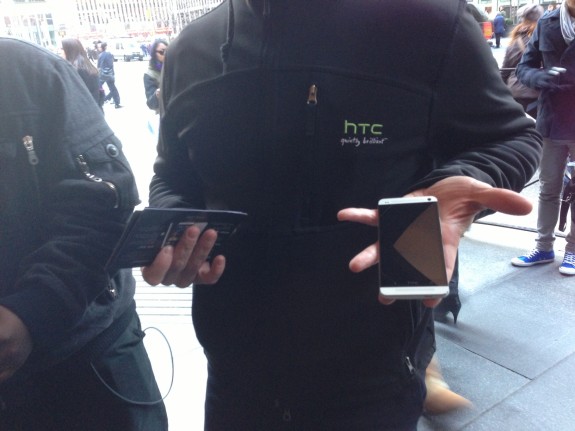 Read: 6 Ways the HTC One Could Beat the Samsung Galaxy S4.

This marketing stunt will likely influence how some journalists cover the Samsung Galaxy S4 launch. Gotta Be Mobile editor Josh Smith noted that the HTC One is very solid and well-built. He said that it’s nice to see an Android phone with no plastic. 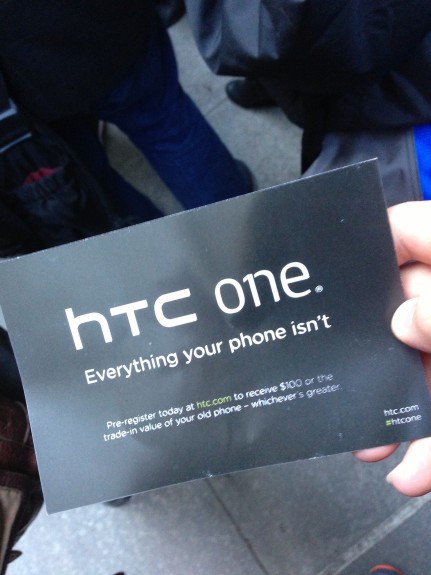 HTC is doing a bit more than just letting people play with the HTC One outside of the Samsung event. It is pushing a trade-in program that offers $100 off the HTC One’s retail price for those willing to pre-order the device. HTC reps are handing out postcards promoting the deal.

Samsung is in the midst of an advertising blitz. The company’s marketing ‘Next Big Thing’ to Americans, spending big bucks on a series of ads, including Super Bowl commercials. It’s currently running ads teasing the ‘Next Big Thing’ alongside a campaign promoting Samsung devices to businesses.

The Galaxy S4 is the most anticipated Android device so far this year and will compete directly with the HTC One and Apple’s iPhone 5. The Galaxy S3, Samsung’s current flagship Android phone, helped propel the company into a global smartphone leadership position at the expense of Apple and HTC. The Galaxy S4 is expected to feature a larger display, faster processor, eye-tracking and a host of new software features.

Above is a mock-up of what we expect the Galaxy S4 to look like.