According to HTC Source, the phablet will not have a removable battery nor will users have access to a memory card slot to augment storage. Users will be capped with 16 GB of internal storage and will likely have to rely on cloud storage for additional storage. 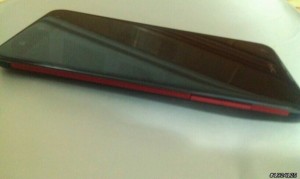 What’s unique is that there will be a second LED notification light for missed calls and other alerts on the back of the device near the camera module.

The device is currently referred to as the HTC DIx, hinting that it could be named the HTC Droid Incredible X once release. Whether this will cause confusion with the older Motorola Droid X series is unclear.

Unlike the earlier rumors about the device from today, HTC Source is reporting that the tablet may not have support for an active digitizer. The source mentions that the S Pen and HTC Scribe from the HTC Flyer did not work with the DIx tablet, which either means that there will be no support for an active digitizer or that HTC has not yet enabled the software for the pen to work.

Additionally, other benchmarks conflict with this rumors in that they show the device to be powered with a dual-core S4 CPU, not a quad-core one.

This device, when launched, will likely compete with Samsung’s Galaxy Note II.