Sprint’s HTC EVO 4G LTE, which is set to arrive in-stores tomorrow on June 2nd, has finally made an appearance in a TV ad that show cases both the device itself and the features that will be coming along with it.

The advertisement comes shortly after the device finally cleared U.S. Customs after a patent dispute with Apple delayed the device beyond its original May 18th release date.

Some pre-orderers have already gotten a hold of the device but tomorrow marks the first time that the general public will be able to get the 4G LTE smartphone. 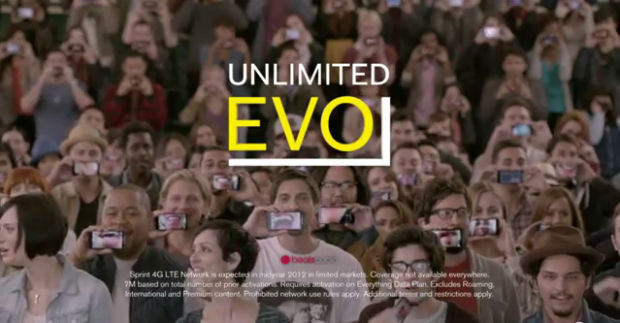 The ad, titled EVO Live :60, is a quick minute-long advertisement that shows off some of the better known features of the HTC EVO 4G LTE.

In the ad, there is a collection of HTC EVO 4G LTE owners who, using their smartphone and Beats Audio headphones, create a symphony of sound.

Also shown is the device’s iconic kickstand which allows owners to prop up the phone in order to better watch streaming content or media on the web.

It also showcases the device’s camera which is one of the best cameras available on an Android device and allows for users to employ continuous shooting.

Sprint also makes sure to alert customers to the fact that it is the only major U.S. carrier that offers pure unlimited data. The carrier also touts the fact that over 7 million people already have fallen in love with EVO.

Overall, the ad is well-done. It touches on some of the bright spots about the phone and it does so in a simple, tasteful manner. That’s refreshing in a mobile marketing world filled with cheap shots and over-the-top vignettes.