Sprint is the last carrier to offer truly unlimited data plans, and for the first time in years, Sprint has the phones to back up their data plans and competitive prices.

Customers looking for a new phone on Sprint undoubtedly find themselves asking if they should buy the iPhone 4S or the HTC EVO 4G LTE.

This question expands past Sprint to AT&T where the iPhone 4S and the HTC One X go head to head, but I’m here to help you pick the best phone on Sprint.

Rather than dive into specs, we’re going to take a look at features, user experience and the apps and ecosystem available for the HTC EVO 4G LTE and the iPhone 4S. 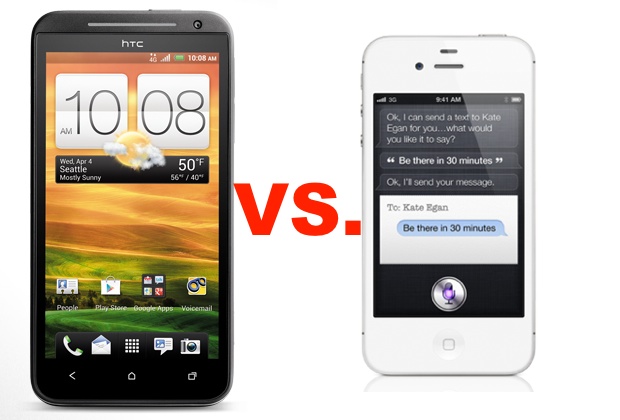 The iPhone 4S display brings a high pixel density (328 PPI), which helps it beat out most Android smartphones in the screen department, but this time around HTC packs in nearly as many pixels per inch (312PPI) which pays off. GottaBeMobile’s Shawn Ingram says the HTC EVO 4G LTE’s display “looks even better than the Retina Display on iPhone 4S.”

Check out the video below comparing the display of the HTC One X to the iPhone 4S. The HTC One X uses the same display as the EVO 4G LTE, so it should give you a good idea of how these two displays look next to each other. 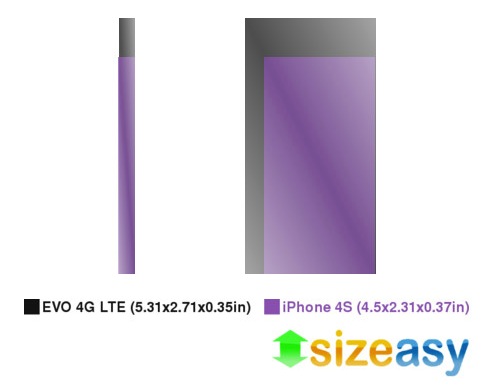 While the Evo 4G LTE is larger than the iPhone 4S, it is not unwieldy. The EVO 4G LTE is close to the Droid Bionic and other devices with a 4.3-inch display thanks to a thin bezel.

Both phones offer better than average displays, so it comes down to the size of the display. In addition to being larger, the EVO 4G LTE’s display has an aspect ratio like HD content, which means no black bars on most movies and TV shows.

Sprint will undoubtedly boast about the speed of their 4G LTE network as a selling point for the HTC EVO 4G LTE,  but keep in mind that this network is not widespread. In fact, Sprint has not turned on the 4G LTE network yet. Once it does, the Sprint 4G LTE rollout will start in Baltimore and Kansas City, followed by expansions in Atlanta, Dallas, Houston and San Antonio. Shoppers who don’t live in these areas will not enjoy the 4G LTE speeds of Sprint’s network until 2013.

This means that the iPhone 4S and the HTC EVO 4G LTE will connect to Sprint’s slower 3G network, at the same speeds. Shoppers who plan to keep the EVO 4G LTE or 2-years may see 4G LTE coverage by the time the contract ends, but with little information about the Sprint 4G LTE rollout it is not worth making a major point in the decision process.

The HTC EVO 4G LTE is capable of using voice and data at the same time, something the iPhone 4S cannot do on Sprint.

Depending on network coverage and traffic users can expect to see speeds similar to that shown on the iPhone 4S in the video below.

The iPhone 4S camera beats most of the Android phones we test, but the HTC EVO 4G LTE packs in HTC ImageSense, a dedicated image processor that pairs with the wide angle lens to deliver a beautiful snapshots quickly.

The HTC EVO 4G LTE has the ability to take still photos while shooting HD video, something the iPhone 4S cannot do without a third party app. The HTC EVO 4G LTE comes with a dedicated shutter button, but it cannot activate the camera when the display is off or the phone is locked.

The iPhone 4S allows users to use the volume up button as a shutter button once the camera is launched, but the placement is less than optimal.

The following samples include photos taken by professional photographers. 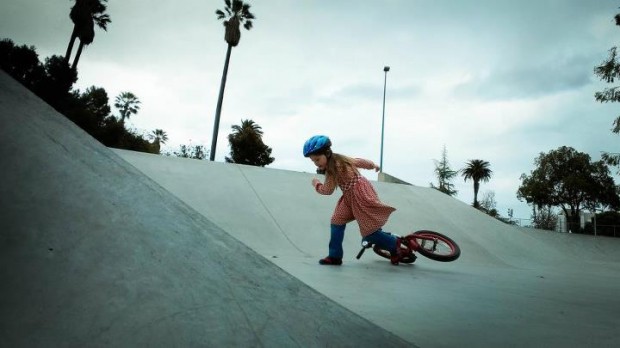 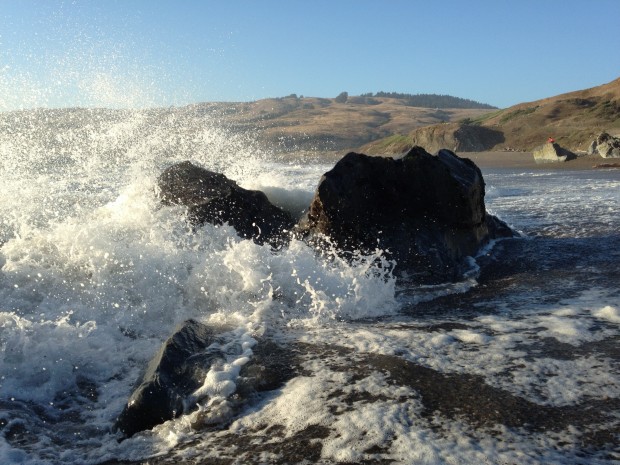 iPhone 4S camera sample at ocean on a bright day.

For a better comparison, check out how the HTC sensor and camera stack up against the iPhone 4S. These samples come from the One X‘, but are representative of shots taken with the HTC EVO 4G LTE. 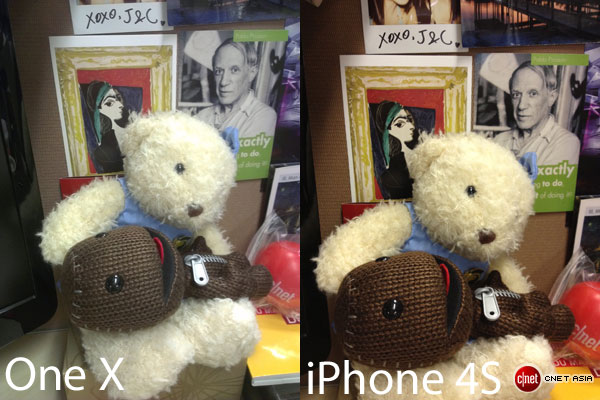 As you can see the iPhone 4S delivers better colors in the photo above, but when the competition heads outdoors, the HDR mode on the HTC phone beats the iPhone 4S. 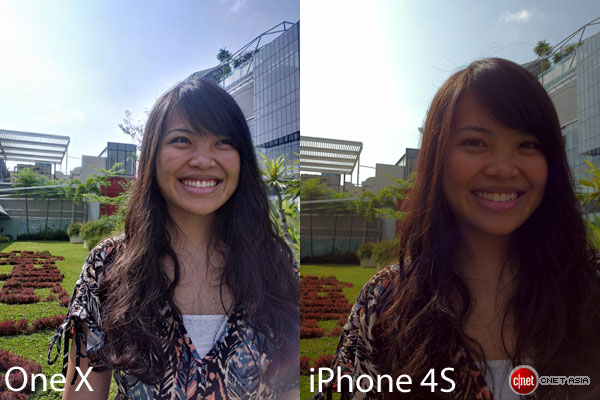 HTC vs. iPhone 4S outdoors with HDR on.

The HTC Evo 4G LTE comes with a kickstand, which makes it perfect for watching movies without the need for a case like the ZeroChroma on the iPhone 4S. The dedicated shutter button for the camera is also a nice addition to the EVO 4G LTE. 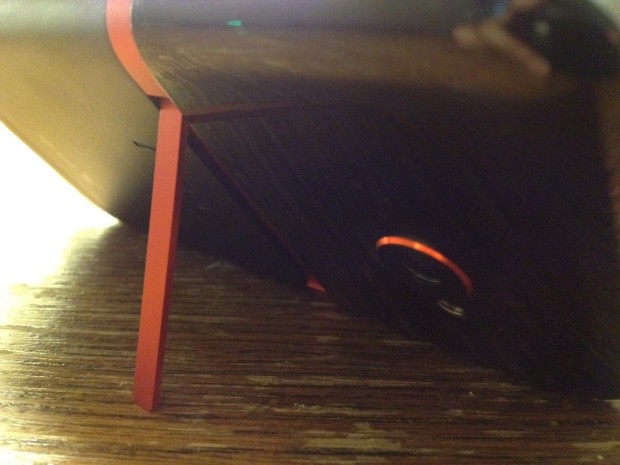 When it comes to storage, the iPhone offers more built in storage, with options up to 64GB, but the EVO 4G LTE counters with a Micro SD card slot capable of holding up to 32Gb of additional storage.

The HTC EVO 4G LTE also supports Google Wallet, allowing users to pay for purchases at McDonalds and other locations using NFC, something not found on the iPhone 4S.

The HTC EVO 4G LTE ships with HTC Sense 4.0, a new skin that some users will prefer over the basic Android look and feel. Check out Sense 4.0 in the video below.

The HTC EVO 4G LTE includes Beats Audio, so be sure to listen to the sound on a nice pair of headphones when you go hands on with the iPhone 4S and the EVO 4G LTE in a local Sprint Store.

The Google Play Store offers many of the same apps as the iPhone app store, but the iPhone has a lead in the app department.

Many popular apps are exclusive to the iPhone, like Jetpack Joyride. Or take a long time to arrive on Android, like Instagram. Max Payne for Android is still missing from Google Play despite a launch on the iPhone weeks ago. The problem also affects games like Mass Effect Infiltrator, which just arrived on Android, long after it was available on the iPhone.

Many iPhone apps look better than their Android counterpart, which is something to keep in mind. Still, Google Play offers most of the apps that people need. Both platforms offer a large collection of free and paid apps, so don’t believe the salesperson who says Android is the only place to find free games and apps.

Users who love accessories and cases will be at home with the iPhone 4S. The iPhone 4s has an un-countable number of cases and accessories, while we can expect a few dozen for the HTC EVO 4G LTE.

Accessories like the Nike FuelBand and many others support the iPhone before Android devices. Users who want a smart watch will prefer the EVO 4G LTE, as Android offers more freedom for push notifications of text messages to a smart watch.

Users thinking of switching from iPhone to Android or from Android to iPhone should check out our posts to learn what to expect.

Switching from iPhone to Android

Switching from Android to iPhone

Choosing between Android and iPhone is a very personal decision influenced by the way each of us uses our smartphone. Android’s strengths are better for some users, while the iPhone’s strengths suite others better. Users with a preference should still check out the competition from time to time, as systems evolve and change with updates.

The HTC Evo 4G LTE is available for $149.99 on Wirefly, and $199 from Sprint and Best Buy. The iPhone 4S is available for $149 at Radioshack and $199 at Sprint. Even if the price for the Evo 4G LTE drops in the coming weeks, it should not play a major role in a purchase decision. No matter which phone users buy, they will still pay the same fees over the course of a two-year contract.

Still have questions about the iPhone 4S and the HTC EVO 4G LTE? Let us know in the comments and we’ll help answer them.