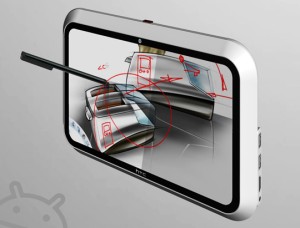 Though they don’t frequently see the light of day, I love the ideas coming out of Yanko Design. Their latest vision is a tablet design called the “HTC Evolve”. Why they’re tying it to a particular vendor is unclear. There’s no mention if HTC commissioned it or has any other involvement with it.

The proposed specs are fuzzy, calling for both an Intel Atom processor and Android OS. While Android could run on Intel Atom, it’s currently intended for ARM. The type of touchscreen is not specified, but an active digitizer is implied by their mention of Alias Sketchbook pro (shown in the top image) and Adobe Photoshop as applications, though neither of them can run on Android, nor on Chrome OS, which is also mentioned as an option. 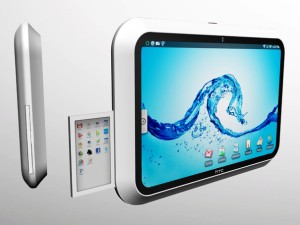 An interesting innovation is a pop-out sidescreen for launching apps and shortcuts. Interesting but flawed; looks way too easy to snap off with an inadvertent twisti or stumble. Another problem I foresee is handling the tapered edges. It’s aesthetically pleasing, but I think it’d be hard to handle.