At the end of its press event to announce Facebook Home the social network announced the first phone to ship with Home is the new HTC First on AT&T.

The HTC First looks a lot like an iPhone 4, except that it comes in more colors and it has a couple extra buttons. The phone uses a 4.3-inch 720p display to display photos (and eventually ads) from the Cover Feed of Facebook home. Below the home screen are a circular home button, a back button and a horizontal line which will likely function as the menu button.

As the first phone with Facebook Home, the HTC First will come to AT&T the same day Facebook Home arrives in the Google Play Store, April 12. Pre-orders for the phone are available now, and it will cost $99.99 on a two-year contract. 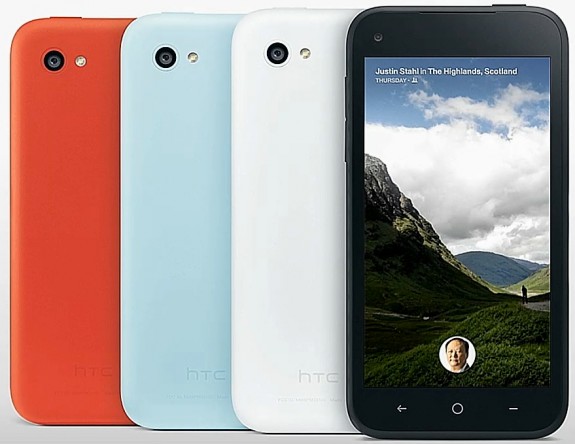 The HTC First will come in four colors: black, white, red and pale blue. Each phone is black from the front, however, the color only applies to the side and back casing of the phone.

The new phone will run Android 4.1 Jelly Bean, and is the first phone to ship with Instagram preloaded. There’s no word on if HTC’s Sense apps will make it into the phone, or if there’s an option to launch into a traditional Android homescreen instead of Cover Feed.

Inside the HTC First uses a Qualcomm Snapdragon 400 processor, making it a decidedly mid-range Android phone. The phone will also have radios for AT&T’s 4G LTE and 3G networks inside. There aren’t many other details about the phone. For now specs like the amount of storage space and the size of the camera are a mystery.