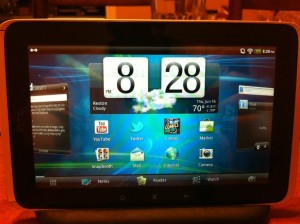 I have, as I hope my ongoing review has conveyed, enjoyed my time with the HTC Flyer immensely. But of course, no device is perfect, and the Flyer has not been without its flaws. Part of that is due to an unrefined, “raw” feel about the device, a roughness around the edges that can be sanded but will be a deterrent to some buyers.

As good as HTC is at making devices, their ability to present those devices to consumers falls short. The Sense UI is very attractive, but it does not add nearly as much value as I’d assumed it would. In addition, they made some bad choices on content, and the second-class nature of the pen, despite being so integral in the interface, remains puzzling. As a result, what should be a slick product retains a feeling of being unfinished. 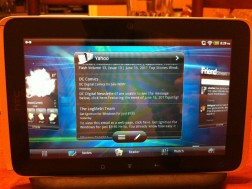 The Flyer uses a paneled interface to readily show your contacts, email, friends (social networks), weather and eBook and video collections by swiping through screens without having to launch an app. Just flip to the left or right to get to a quick view of data. The problem is, they’re not necessarily quicker or even that useful.

Flipping to the email panel, for example, takes a couple of swipes from the home screen. Launching the email app via the home screen icon takes one tap (or one move from the lock screen). They both show the inbox list, except any actions require being in the mail app, which, from the panel, requires a tap. The panel really doesn’t save me any effort here. 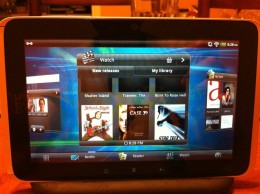 The ebook and video panels offer less convenience since launch icons for both are in the bottom dock, present when looking at any panel. Why would I want to swipe through up to three panels to see my library, when I have one-tap access to it from any panel?

The weather panel is a great idea with poor execution. This panel shows the current weather with projected high and low temp for the day and forecasts for the next few days. That’s useful, but the current weather with high and low are already shown on the main panel and can also be shown on the lock screen. Do we really need this on up to three screens? The panel can also be flipped to show the weather in five other locations. That’s useful to some, but most people don’t jump between that many cities that often. While this and the animation showing the current weather (on up to three screens) are dazzling features, they come at the expense of utility. 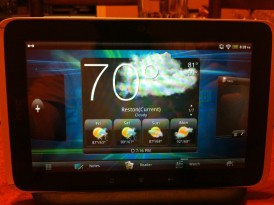 What the weather panel doesn’t show is the hourly forecast, which is the one I find most useful. Checking the current weather is as easy as looking outside, and I worry about tomorrow’s weather tomorrow, but I rely on the hourly forecast to figure out if it will rain after work today. Getting to that requires tapping through the panel to the app, which can then take another two taps to reach the hourly. The weather panel should be incredibly useful, but instead the content choices reduce it to an animated roadblock on the path to info I access nearly every morning.

In my opinion, the panel approach has great advantages and I appreciate the intent here, but on the Flyer, what’s being presented and how it’s being presented are not optimal. The contacts and friends panels are done right, giving me quick views and access that’s different from what’s in an app, but 2 out of 6 isn’t a great score. One panel I would have liked is a notepad, where I could jot short notes that get sent to the notes app for organization later, similar to the sidenote option in OneNote. 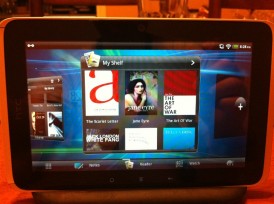 Warner mentioned in his encounter with the Flyer that he had a “visceral dislike” for the eReading experience that he can’t pin down. I think I know what he means. I find the eReader functionality and interface to be as fluid as anything else on the Flyer, quite comparable to other LCD eReaders.

The problem, again, is the content and presentation. The included sample eBooks are taken straight from Project Gutenberg without editing or further clean-up, which unfairly detracts from the impression it gives of the user experience.

The worst example is the version of “The Art of War” they’ve included. It is a raw version from Project Gutenberg with editor notes at the beginning and words throughout broken by accents that fall next to letters instead of over them. Smooth page turning and resizing does not impress when the page contents are that rough. The other included books are not nearly that bad, but none are professional quality. This won’t matter to some, and the problem is easily solved by filling the Flyer with your own eBooks, but it creates an unappealing impression to someone new to the device.

The pen and that “clicky” screen

The only thing I would add about the pen to what I’ve already covered in my post on the “Inking Experience” is to explain why people keep bringing up that “clicky” screen. I used it primarily in a noisy environment so the clacking of the pen against the screen didn’t bother me, but I definitely understand why it’s turned some people off. It’s quite noticeable. However, the problem is primarily with the pen. The hard pen tip not only claps against the screen but also against the pen body itself. Tapping on a soft surface cuts the noise from one side of the impact, but not the other.

Aside from that, I just want to reiterate that the rough edges I find with the pen implementation are due to comparison to the pen experience on a Windows Tablet PC. That’s a matter of research and development, not choosing what content to display and how to display it as with some of the other deficiencies.

That distinction is important. There’s nothing HTC could have done about the gap between their inking technology and Microsoft’s. The time and money separating the two efforts is massive, and I understand that. But the poor choices made on content and presentation are really unnecessary. I know I can change the content and hack the panels, but that’s not an option for a prospective buyer flipping through it at the store. These unfinished spots can and will ruin a first impression, and that’s the real problem with these rough edges. 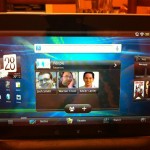 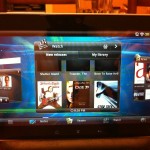 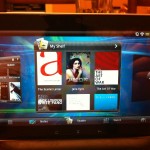 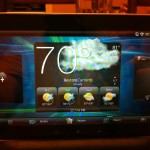 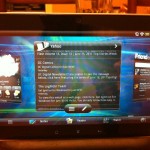 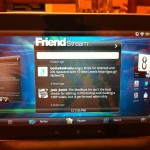 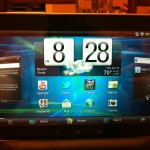