HTC may be giving Apple’s controversial gold-hued iPhone 5s the nod as a new leak suggests that the Taiwanese smartphone-maker may be working on its own gold HTC One smartphone. The HTC One first debuted in silver and has since been released in various colors, including black, red, and blue. Adding a gold option would broaden HTC’s appeal to more customers, especially those in the EMEA market where gold may be a more attractive option.

Leaked photos published on Phandroid show the front of the HTC One in gold. The metal components occupied by the front-facing stereo BoomSound speakers were displayed, but the rear of the HTC One smartphone was not. At this time, it’s unclear how authentic these leaked images are, but given a new interest in gold phones, it could help HTC ride on Apple’s coattails in select markets where gold may be preferred. 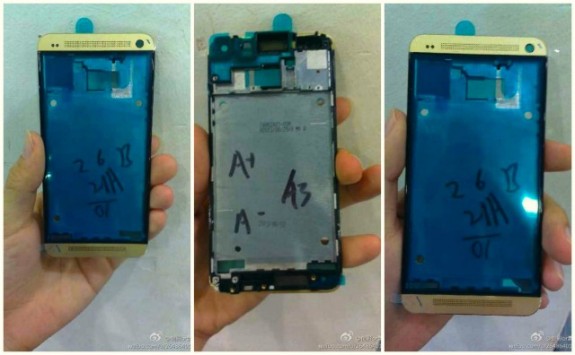 “At first glance it looks like nothing more than yellow lighting from the room, but in the middle image, you can see darker hues of gold on the inside of the housing,” the site wrote.

Like Apple, HTC boasts the use of a unibody aluminum enclosure for the HTC One’s frame and the HTC One is considered by many tech writers to be the first Android smartphone to come with an Apple-like build quality thanks to its use o metal, glass display, and zero-gap construction process. And now, by offering a gold edition of the HTC One, HTC may be inching closer to Apple’s territory as the latter had recently announced that its new flagship smartphone will be coming in either silver, space grey, or gold colors with a unibody aluminum finish and 4-inch Retina Display.

This isn’t the first time that we’ve seen the HTC in gold though. In the past, a gold plated HTC One was shown off, but that model wasn’t an official release from HTC and was created by a third-party.

Given that color has been a hot topic in the mobile industry, it’s unclear if a litigious Apple will be going after HTC. Both companies were involved in the past in a lawsuit, but that suit had been settled for an undisclosed sum that HTC says would help it focus its resources and attention to creating great products rather than on lawyers. Additionally, a highly protective T-Mobile of its magenta color had gone after Engadget Mobile in the past and AT&T-owned AIO Wireless for using a different hue of the magenta tone in those companies’ logos.