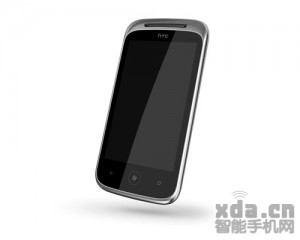 Images for an un-released HTC Ignite have surfaced showing a Windows Phone 7 device that has similar design cues to the HTC Desire HD and the Inspire 4G. The image was provided from Chinese-based website xda.cn and shows a slate-style smartphone with a large touchscreen and three touch buttons on the bottom of the screen that are required for Windows Phone 7 devices.

Not a lot of details are known, still, at this time, though xda.cn did provide some basic specs of the device, including a 3.7-inch WVGA display, Qualcomm CPU clocked at 800 MHz, 512 RAM, and a 5-megapixel camera with autofocus and LED flash. The phone is capable of 7.2 Mbps, though it’s unclear what 3G protocol the device will use. What’s really dubious is mention of support for a resistive, rather than capacitive touchscreen.