Rumors of the HTC One successor for 2014 (HTC M8) have been swirling for months and months, and the latest of many claim we’ll see on-screen navigation keys replace the buttons of old.

This week was full of rumors and leaked photos, most of which were likely fake, but this evening we’re getting what could be our first official look at Android 4.4.2 KitKat and the new Sense UI 6.0 on the HTC M8. While we’re not getting an actual look at the handset, the popular leakster @evleaks just revealed the homescreen for the HTC M8. 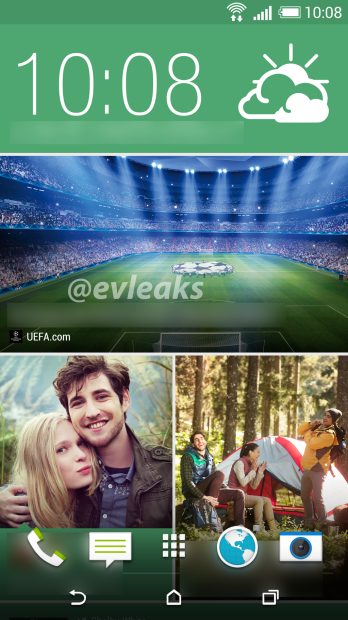 Multiple different sources have all reportedly “confirmed” we’ll have on-screen keys replace the buttons of old and that useless HTC logo from the original, and instead a 5-inch 1080p HD display will be the face of HTC’s new handset. Aside from the new Blinkfeed and on-screen keys, this doesn’t reveal much.

The new on-screen keys are clearly shown above, as well as the “immersive” mode of Android 4.4.2 KitKat blending the display through the buttons and into the notification bar on the top, but that’s all. However, we already know plenty about HTC’s upcoming flagship smartphone.

We’re looking at Android 4.4.2 KitKat which is as usual, covered with HTC’s Sense user interface, but the new HTC M8 will have a brand new Sense UI 6.0 with tons of new features. Previous leaks talked up a better experience, polish around the edges, color-matched apps, and of course the usual grey, black, and white color schemes we’re familiar with from HTC.

Of course the latest word is HTC will deliver this 5-inch 1080p quad-core powered smartphone running the latest version of Android sometime in March, with a rumored announcement set for late February at Mobile World Congress in Spain.

One thing we can take away from all these leaks as of late, is that HTC is getting close to launch and everything is finally coming together. Expect more details and leaks to follow in the coming days and weeks.