New leaks of the HTC One successor, codenamed the HTC M8, have appeared this weekend giving us what could be our first look at the final product.

While this is just one leak in a sea of many over the past few weeks, most previous leaks and photos showcased what could be photoshopped versions of the original, or early prototype designs that closely resembled the model from 2013. Here though, found by the blog NowhereElse, we’re seeing a completely different looking HTC M8 with rounded edges and a new metallic finish. 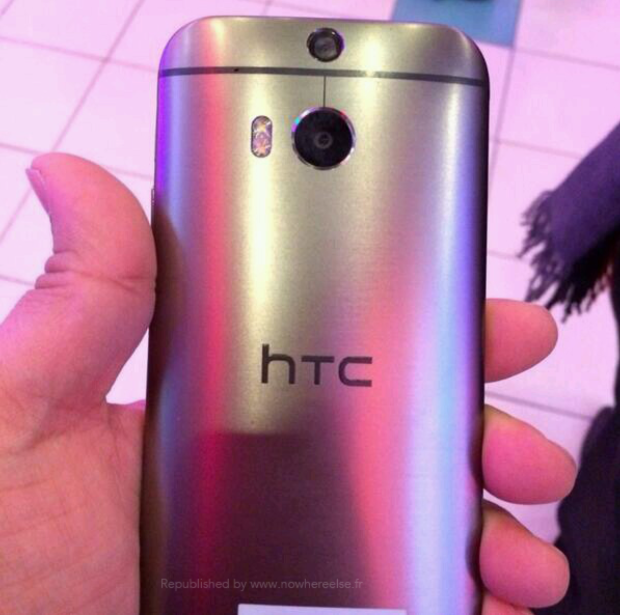 Samsung already announced its new handset, the Galaxy S5, will be announced later this month in Spain during an event on February 24th, but so far there’s no new information from HTC. While all previous reports and rumors have this new smartphone coming in late March, we’re expecting an announcement at Mobile World Congress as well later this month, but the company has been rather silent on details.

Following numerous leaks over the past month or two, we know basically everything about this upcoming device already. While there’s still a few different pictures that vary from what we see above, and some showing a huge front bezel housing nothing but an HTC logo, we’re bound to get all the final details soon.

At this point the final design is either still up in the air, or there’s been countless leaks that are fake or early prototype devices. This first photo shares an uncanny resemblance to the original, which wouldn’t be a bad thing, but many consumers are probably hoping for something new and somewhat different.

If this latest photo is indeed the real thing, with a new set of curves and a shiny metallic finish, it would show that you really can take an excellent device and make it worse. Some may be fans of the new look, but that will be decided by consumers come launch day. That being said, official information and photos should be surfacing any day now, and we’ll surely bring any and all HTC M8 details as they arrive.